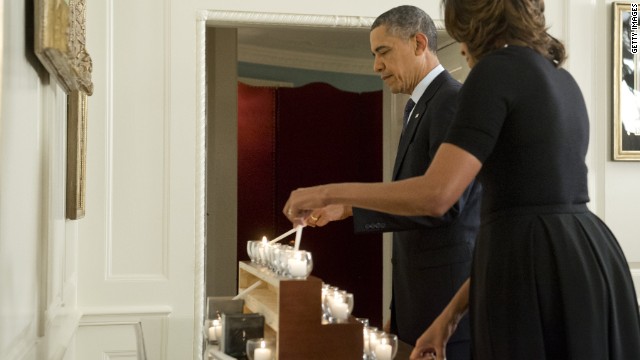 On Newtown anniversary, Obama says ‘these tragedies must end’

(CNN) – One year after a mass shooting at Sandy Hook Elementary School in Newtown, Connecticut, killed 20 first-graders and six adults, devastating a community and shocking the nation, President Barack Obama said we haven’t done enough to keep our country safe.

"More than the tragedy itself, that’s how Newtown will be remembered," the President said Saturday in his weekly address.

Obama and First Lady Michelle Obama marked the anniversary Saturday by lighting 26 candles at the White House - one for each of the victims at Newtown - and a moment of silence.

"And on this anniversary of a day we will never forget, that’s the example we should continue to follow. Because we haven’t yet done enough to make our communities and our country safer.”

Change, he said, must come from the American people, not lawmakers in Washington.

"Beneath the sadness, we also felt a sense of resolve – that these tragedies must end, and that to end them, we must change."

Efforts to enact stricter gun laws fizzled in April when a bill that included stronger federal background checks for gun purchases failed to pass the Senate.

Obama’s address comes after another shooting at a school in Centennial, Colorado, on Friday. Three were rushed to hospitals after a student with a gun entered Arapahoe High School with an intention of harming a specific faculty member, officials said.

The shooting at Sandy Hook on December 14, 2012, marked the second-deadliest school shooting in U.S. history, after the April 2007 slaying of 32 people at Virginia Tech. Adam Lanza, the Sandy Hook gunman, also killed his mother and himself.

Shortly after the Newtown massacre, Obama said in an interview on NBC that the shooting was the worst day of his presidency.