(CNN) - The New Mexico Supreme Court has ruled the state may not deny same-sex couples the freedom to marry, concluding current laws are unconstitutional.

The ruling Thursday is another victory for gay and lesbian couples nationwide seeking to legally wed. New Mexico would become the 17th state plus the District of Columbia to allow such unions.
END_OF_DOCUMENT_TOKEN_TO_BE_REPLACED

(CNN) - In light of "Duck Dynasty" star Phil Robertson suspension from the show over anti-gay remarks, Republican Louisiana Gov. Bobby Jindal indicated media outlets have thrown out the First Amendment and the "politically correct crowd" is only concerned with viewpoints they agree with.

Palin wrote in a post to her Facebook page that "Free speech is an endangered species."
END_OF_DOCUMENT_TOKEN_TO_BE_REPLACED 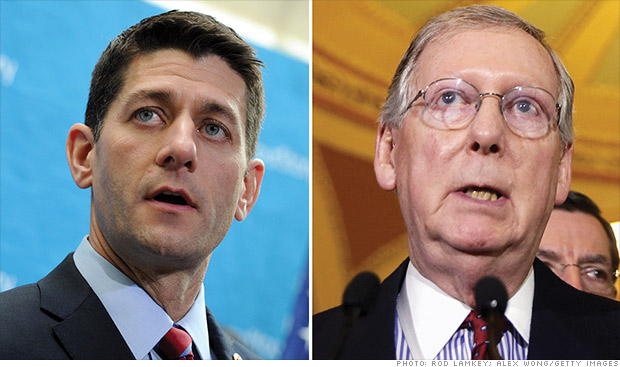 What the next debt ceiling fight will look like

New York (CNNMoney) –– House Budget Chairman Paul Ryan and Senate Minority Leader Mitch McConnell said this week that Republicans will demand something in exchange for an increase in the debt ceiling early next year.

The White House, meanwhile, said it won't negotiate on the issue.

(CNN) - Two days after three leading members of the House of Representatives announced their retirements, another longtime congressman announced Thursday that he plans on staying put on Capitol Hill.

END_OF_DOCUMENT_TOKEN_TO_BE_REPLACED

(CNN) - Hillary Clinton says she'll decide in 2014 about whether she'll make another run for the White House in 2016.

"Obviously, I will look carefully at what I think I can do and make that decision sometime next year," Clinton said in an interview with ABC's Barbara Walters that aired Wednesday night.

END_OF_DOCUMENT_TOKEN_TO_BE_REPLACED

“Biden is dead meat out here,” Branstad asserted Wednesday in an interview with CNN inside his office at the gilded state capitol building. “He is not going anywhere.”

END_OF_DOCUMENT_TOKEN_TO_BE_REPLACED

Altoona, Iowa (CNN) – Brian Schweitzer, a former Montana governor and self-styled prairie populist who wants to be part of the Democratic presidential conversation for 2016, drew a bright line between himself and presumed frontrunner Hillary Clinton on Wednesday by raising an topic that has largely faded from the political spotlight amid rising economic anxiety: the Iraq War.