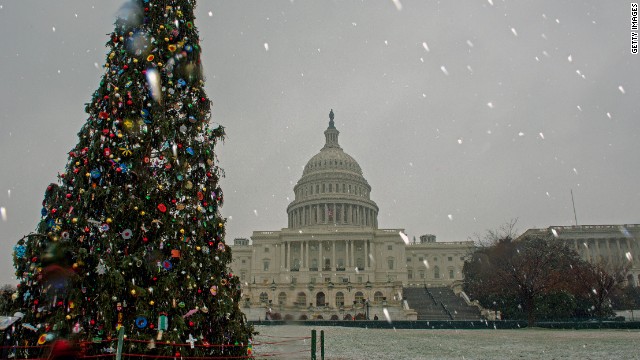 (CNN) - Senators cast their last votes of the year Friday - confirming a new IRS commissioner and the No. 2 official at the Homeland Security Department - and dashed from the Capitol to start their Christmas recess.

Their final votes, to break Republican filibusters and approve several of President Barack Obama's nominees, seemed a fitting conclusion to a year when the divisive issues of filibusters and nominations were dominant.

Friday wrapped up a grueling week of work for Senate lawmakers, who conducted marathon sessions over stalled nominees. Majority Leader Harry Reid was hospitalized briefly for exhaustion. He was back home and cleared to return to work by evening.

A late night deal Thursday between the parties shortened debate time and meant Senators would not have to stay into the weekend - or longer - to vote on a handful of stalled nominees Democrats were trying to clear.

Republicans, who are angry over rule changes Democrats put in place that limit the GOP's ability to filibuster nominees, had been reluctant to back off demands that all debate time allowed by Senate rules be used before confirmation votes take place.

The agreement let them clear Alejandro Mayorkas to be the deputy secretary of the Department of Homeland Security; Brian Davis to be a federal judge in Florida, and John Koskinen to the commissioner of the IRS.

Senators also voted to break a filibuster of Janet Yellen to be chairman of the Federal Reserve although a final confirmation vote won't take place until January 6.

Animosity between the parties was captured in a post-vote exchange between Sen. Dick Durbin, D-Illinois, the second-ranking Democratic leader, and Sen. Lindsey Graham, R-South Carolina.

Durbin wanted approval to waive a rule that said any presidential nominations that hadn't been approved by the end of the year - Durbin said there were 238 such nominees - had to be returned to the White House where the president could then re-nominate them.

"To require the White House to start over is just literally a waste of time and unfortunate for these nominees, many of whom have been waiting for a long, long period of time. This is a chance," Durbin said, "to get next year off to a good start."
Graham said no.

"All I can say is that the normal way the Senate has operated for a couple of hundred years has been destroyed this year and to ask that normalcy come about now is just beyond the pale," Graham said.

"I understand that we're in a point of great emotions and feelings and stress in the Senate over the change in the rules of the use of the filibuster," Durbin responded. "Unfortunately it appears we're going to stay in that state for, at least, a short period of time."

Despite the testy exchange between the Senators, the two did agree to clear a batch of military nominations so that the men and women of the armed services won't be caught up in the political standoff.