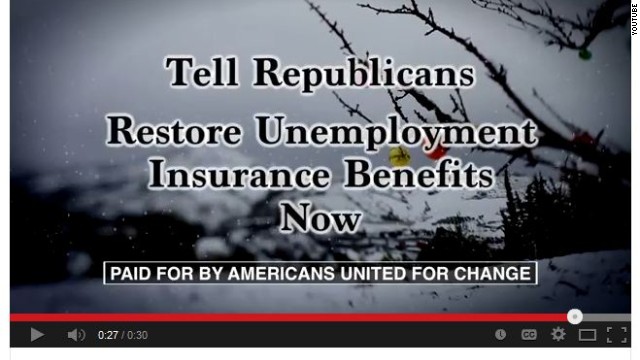 “To the 1.3 million Americans losing benefits, Merry Christmas, from the GOP,” the ad says. The spot will run Thursday and Friday on national cable TV networks, including CNN, the group said.

The unemployment payments are ending because Congress didn’t pass an extension on the recession-era program that offers benefits for people who still can’t find work even after their state aid runs out. The program expires Saturday.

“For Washington Republicans to Scrooge over a million Americans out of unemployment benefits three days after Christmas takes a lot of nerve and makes little economic sense,” Brad Woodhouse, president of Americans United for Change, said in a statement.

“All out-of-work Americans and their families got for Christmas from the GOP were lectures about pulling up on their bootstraps a little harder.”

Another 850,000 workers will be missing the program in the first three months of 2014 when their state benefits run out.

A pair of Democratic lawmakers were adamant Thursday in a conference call with reporters that the benefits be extended for three months, and that a way be found to pay for them only afterwards.

"There's a sense that this is indeed a lifeline," said Rep. Sandy Levin of Michigan.

Sen. Jack Reed of Rhode Island also argued that eliminating the benefits will hurt the economy because without the payments, recipients will severely curtail their spending.

The Republican National Committee didn’t immediately respond to a request for comment Thursday.