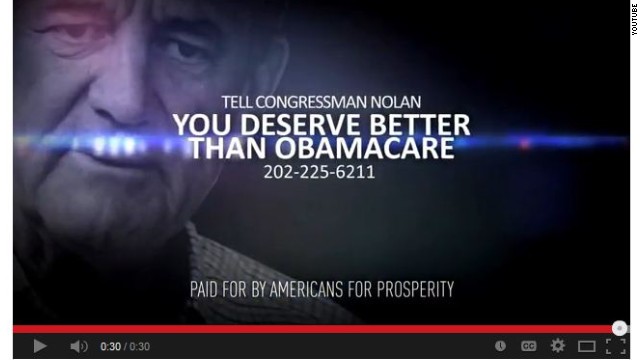 Over $600,000 will be spent on spots airing in the districts of Richard Nolan of Minnesota and Ann McLane Kuster of New Hampshire, according to AFP. The new spots put AFP’s total Obamacare TV ad-spending for 2013 at roughly $16 million, money that comes in part from the billionaire Koch brothers.

Obamacare is “the lie of the year,” the narrator declares in the ad targeting Nolan. Implicit in that statement is President Barack Obama’s promise that Americans would be able to keep their health insurance and doctor, no matter what.

The White House has in recent months walked back from that promise after it became clear that many Americans would lose their existing insurance because it didn’t meet the minimum standards of coverage under the health care law.

“140,000 Minnesotans have already lost their coverage,” the ad says, featuring the story of a man who says he’s suffered three heart attacks in the last six years and lost his insurance due to the coverage requirements mandated under the Affordable Care Act, better known as Obamacare.

“Congressman Nolan, Obamacare needs to be repealed,” the man declares.

With the 2014 midterms around the corner, AFP is launching the ads the day after Christmas to show the group’s continued resolve to keep going after the health care law, according to a statement from the organization.