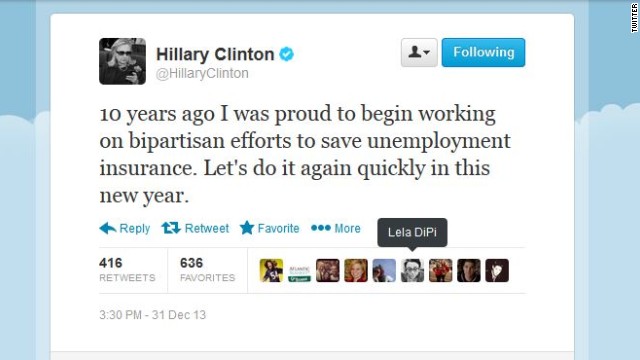 (CNN) - Hillary Clinton is weighing in on an issue that's a top priority right now for the White House and congressional Democrats: Unemployment insurance.

"10 years ago I was proud to begin working on bipartisan efforts to save unemployment insurance. Let's do it again quickly in this new year," the former Secretary of State and potential Democratic presidential contender tweeted Tuesday.

Long-term unemployment benefits for 1.3 million Americans expired Saturday, after Congress failed to pass an extension. Most Democrats blame congressional Republicans for letting the benefits expire. Many Republicans argue that the benefits are no longer needed as the economy has improved and the unemployment level has dropped.

Democratic Sen. Jack Reed of Rhode Island and GOP Sen. Dean Heller of Nevada are co-sponsoring a bill that would reinstate the benefits. Senate Majority Leader Harry Reid says he'll take up that measure once the Senate returns at the beginning of next week.

Extending unemployment insurance and raising the minimum wage are two issues near the top of the Democrats' agenda as part of their emphasis on income equality heading into the 2014 midterm elections. The issues are also very important to those on the left, who are a key electorate in the Democratic presidential primaries and caucuses.

Two weeks ago, after complaints by liberals in Congress that an extension of unemployment benefits was left out of the bipartisan budget agreement, Clinton tweeted "What happens to kids in families cut from unemployment insurance & food stamps? They're #2SmallToFail & deserve an equal chance to succeed."

After four years of rarely weighing in on domestic issues as she served as America's top diplomat, Clinton is increasingly stating her positions on such issues. If the former First Lady and Senator from New York decides to make a second run for the White House, she would instantly become the overwhelming front runner for the 2016 Democratic presidential nomination.

– CNN's Elise Labott and Jim Acosta contributed to this report.