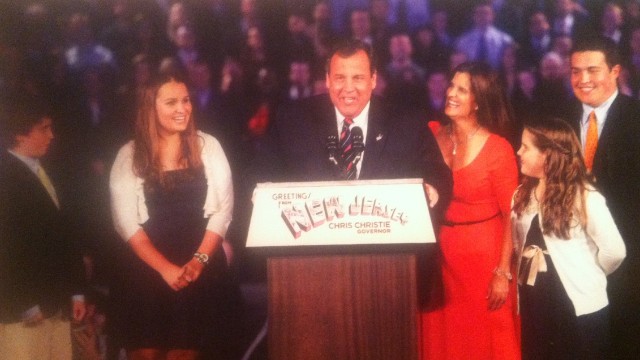 Washington (CNN) – When Bobby Kaufmann opened his mail a few days before Christmas, a smiling picture of New Jersey Gov. Chris Christie is not what he expected to see.

But inside an envelope from New Jersey, the Iowa Republican lawmaker got a Christmas card from Christie–a man he has never met.

“It was surprising that I received it,” Kaufmann said with a laugh. “It is not something you expect to see in your mailbox.”

Kaufman is one of a handful of Republican lawmakers in Iowa and across the country who received Christmas cards from Christie, the hard-charging Republican governor who tops many early polls for his party’s nomination in 2016.

As Iowa is home to the first-in-the-nation caucuses, anything Christie does there is interpreted in the context of a future presidential bid.

For Kaufmann, the fact that he received the card said a lot about Christie’s future aspirations.

“I think if there were any doubts that he was running for president, this dispelled them,” he told CNN. “It is a smart move, in my opinion, especially in my state. I was very happy to see him pay attention to Iowa.”

The front of the card, which was first reported by Buzzfeed, features a photo of the governor and his family on stage during Christie’s November acceptance speech after convincingly winning four more years as governor of New Jersey. (Shown above)

Inside, the card reads “Wishing you peace and happiness this holiday season and throughout the coming year.”

The card, which was paid for by the New Jersey Republican State Committee, also quotes Romans 15:13: “May the God of hope fill you with joy and peace in believing...”

Another picture of the Christies on stage graces that back of the card, along with a line that expressly says the holiday gesture was “not paid for at taxpayer expense.”

Peter Cownie, another Republican member of the Iowa House who received the card, said when he opened it he “smiled” because he thought it was a novel and interesting tactic for a Republican governor.

“I consider it pretty smart, innocuous way of introducing himself to Iowans,” he said. “You have to work hard out here in the caucuses and this is an introduction, so to speak. This is a way to do that. I think we all kind of know what is going on.”

Unlike Kaufmann, Cownie said he met Christie once at a fundraiser for Iowa Gov. Terry Branstad, but he didn’t expect to receive a Christmas card from him.

As for Christie’s political aspirations, Cownie was blunt in what he thought about receiving the card.

“We start seeing this stuff pretty early,” he said. “I haven’t gotten any other Christmas cards from any other governors.”