Washington (CNN) – Who says you need a candidate to raise a bundle of cash? 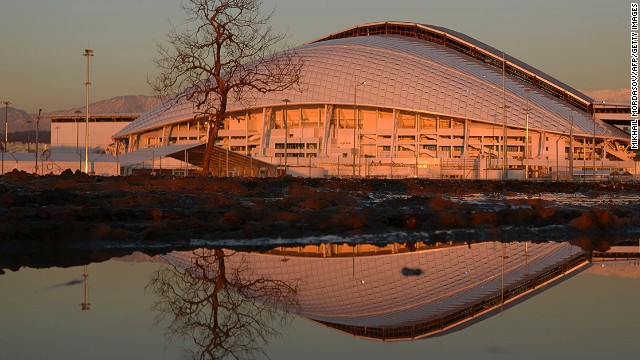 A picture taken on December 17, 2013, shows a view of the construction site of 'Fisht' Olympic Stadium in the Imereti Valley in the Russian Black Sea resort of Sochi.
January 7th, 2014
08:48 PM ET

(CNN) - The Obama administration will run television ads in some cities during next month's Winter Olympics pushing health care coverage under the Affordable Care Act.

An official with the Department of Health and Human Services said the ads will run in markets with the highest rate of uninsured people during the Olympics. The official would not confirm the cost of the ad buy.
END_OF_DOCUMENT_TOKEN_TO_BE_REPLACED

He repeatedly apologized for his actions and insisted he's not yet thinking about re-election to another term.
END_OF_DOCUMENT_TOKEN_TO_BE_REPLACED

Washington (CNN) - Americans appear to view marijuana in a class by itself.

According to a new national poll, marijuana is not as wicked as other illegal drugs like heroin and cocaine, and much less dangerous than legal substances like alcohol and tobacco.
END_OF_DOCUMENT_TOKEN_TO_BE_REPLACED

Both are potential 2016 presidential contenders.

Gates, who led the Pentagon under two presidents from 2006 to 2011, also offered scathing critiques of President Barack Obama and Congress in the memoir, “Duty: Memoirs of a Secretary at War,” which was obtained by CNN and is set to hit bookshelves next week.

END_OF_DOCUMENT_TOKEN_TO_BE_REPLACED

(CNN) - Former Defense Secretary Robert Gates set off shock waves in Washington with accounts from his upcoming memoir, in which he unleashes blistering criticism of Congress and his former colleagues in the Obama administration.

He also claims the President lost faith in his own Afghanistan policy.
END_OF_DOCUMENT_TOKEN_TO_BE_REPLACED

Bob Woodward reports: Robert Gates, former defense secretary, offers harsh critique of Obama’s leadership in ‘Duty’
In a new memoir, former defense secretary Robert Gates unleashes harsh judgments about President Obama’s leadership and his commitment to the Afghanistan war, writing that by early 2010 he had concluded the president “doesn’t believe in his own strategy, and doesn’t consider the war to be his. For him, it’s all about getting out.” – Washington Post

GATES SEES SIMILARITIES BETWEEN G.W. BUSH & OBAMA, In an excerpt for the Wall Street Journal, Gates writes: “Stylistically, Bush and Obama had much more in common than I expected. Both were most comfortable around a coterie of close aides and friends (like most presidents) and largely shunned the Washington social scene. Both, I believe, detested Congress and resented having to deal with it, including members of their own party. They both had the worst of both worlds on the Hill: They were neither particularly liked nor feared. Nor did either work much at establishing close personal relationships with other world leaders. Both presidents, in short, seemed aloof from two constituencies important to their success.”

GATES QUESTIONS VICE PRESIDENT JOE BIDEN’S JUDGMENT: "I think he has been wrong on nearly every major foreign policy and national security issue over the past four decades.”
END_OF_DOCUMENT_TOKEN_TO_BE_REPLACED

White House: Judge us not by what passes Congress

Washington (CNN) - Signaling what could be a difficult year for enacting legislation in Washington, a top Obama administration official said the White House is taking a realistic view on what can pass Congress in the months leading up to the fall's mid-term election.

Don't judge us by what makes its way through Capitol Hill, the senior administration official cautioned.
END_OF_DOCUMENT_TOKEN_TO_BE_REPLACED

(CNN) - A national survey released Tuesday shows just over half of Americans are looking forward to this fall's congressional elections, and indicates Republicans are more excited to head to the polls in November than Democrats.

As campaigning picks up in the new year for the midterm elections, the Pew Research Center survey shows 63% of Republicans are anticipating the congressional elections, compared to 53% of Democrats. Fifty-one percent of all respondents said they are "especially looking forward to" the elections, with 49% saying they are not.
END_OF_DOCUMENT_TOKEN_TO_BE_REPLACED

(CNN) - As Congress debates a proposed $6.4 billion package extending unemployment insurance benefits for another three months, Democratic and Republican leaders continue to argue over whether the additional spending should be offset by spending cuts elsewhere in the federal budget.