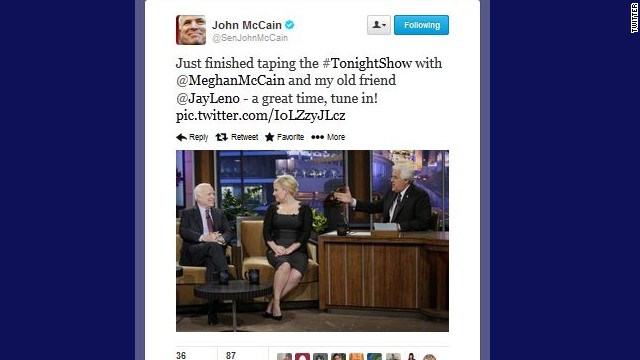 (CNN) - While a majority of members in Congress are focusing on the 2014 midterm elections, one Senator is looking ahead toward his potential 2016 re-election plans.

Sen. John McCain said he is still "looking very seriously" at a sixth Senate run in 2016 during an interview on NBC's "The Tonight Show with Jay Leno" Monday night.

"I think there is a lot going on. I'm at the top of my game so I'm very happy to have the chance," McCain said.

In October, he also said he was "seriously thinking" about running for another term.

The Arizona Republican easily held his seat in the 2010 election against Democrat challenger Rodney Glassman. He faced a more challenging contest leading up to that in the GOP primary against former Rep. J.D. Hayworth.

McCain was asked by Leno if he would consider putting his hat in the ring again for another presidential run. McCain pointed to the advice of an "old beloved friend," former Democratic Rep. Morris Udall, who ran for president in 1976.

McCain did indicate who he thinks might be a better fit to lead the Republican Party in the next presidential election.

"I think we have a lot of governors, a number of Republican governors. I like Chris Christie. I like Bobby Jindal," he said. "I like a number of those people that succeeded in states with both Republicans and Democrats."

New Jersey Gov. Chris Christie an Louisiana Gov. Bobby Jindal have long been thought to be contemplating 2016 presidential runs, but neither governor has confirmed those plans