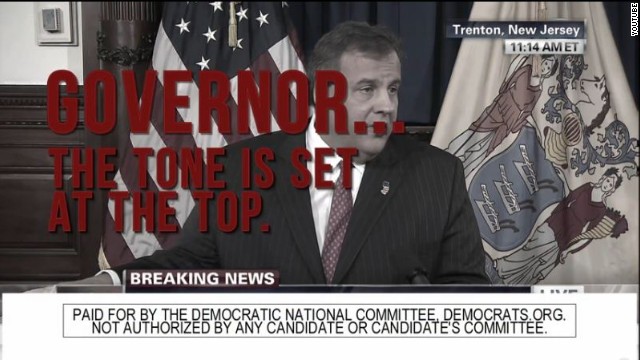 Washington (CNN) - The Democratic National Committee, which has been blasting New Jersey Gov. Chris Christie for weeks over the bridge scandal, is releasing a new web video Friday, accusing him for creating a vitriolic culture among his staff.

"Chris Christie fired a top staffer citing his 'callous' tone. Christie argued that this was not reflective of the culture he's created in his office. But, over the last four years this 'callous indifference' is exactly the tone we have seen over and over again from Christie," said Michael Czin, press secretary for the DNC.

The ad showcases a series of clips of the brash Governor getting in tense arguments with voters and reporters in the past.

It ends with footage from Thursday's press conference in which Christie said he was "disturbed by the tone and behavior and attitude–callous indifference–that was displayed in the emails."

As he's talking, the DNC inserted words on the screen that read: "Governor, the tone is set at the top."

At the press conference, Christie hit back at characterizations that was a "bully."

"I have very heated discussions and arguments with people in my own party and on the other side of the aisle," he said. "I feel passionately about issues. And I don't hide my emotions from people."