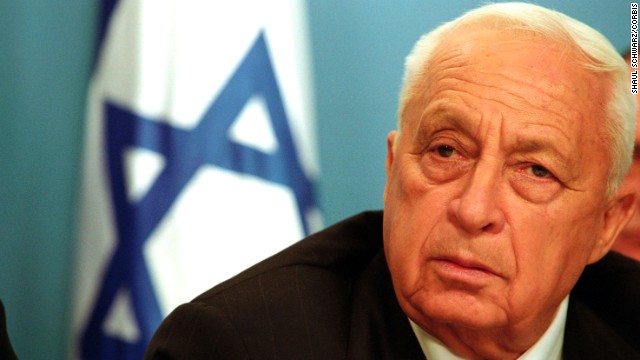 "I look forward to leading the U.S. delegation to his memorial service, to pay respects to the man and to pay tribute to the unshakeable partnership between the United States and Israel," said Biden, expressing his condolences to Sharon's family and Israel.

[twitter-follow screen_name='politicalticker']
Sharon died Saturday after a massive stroke in early 2006 left him comatose for eight years. He was 85.

A state memorial ceremony will be held at the Knesset, Israel's parliament, starting at 9:30 a.m. Monday. A funeral procession that will end at Sharon's ranch in the Negev Desert will follow.

The announcement of Sharon's death came as U.S. presidents, diplomats, and politicians eulogized, walking a fine line between honoring his legacy and not endorsing the controversial parts of his record.

President Barack Obama issued his own statement that many categorized as tepid and careful.

"Michelle and I send our deepest condolences to the family of former Israeli Prime Minister Ariel Sharon and to the people of Israel on the loss of a leader who dedicated his life to the State of Israel. We reaffirm our unshakable commitment to Israel’s security and our appreciation for the enduring friendship between our two countries and our two peoples," he said - before affirming his "commitment to the goal of two states living side-by-side in peace and security."

Sharon had a turbulent relationship with the Palestinian people, encouraging Israelis to establish settlements on occupied Palestinian land while also leading the push for Israel's historic 2005 withdrawal from 25 settlements in the West Bank and Gaza, which were turned over to Palestinian rule for the first time in 38 years.

Much of that history was glossed over as people mourned his loss.

"Ariel Sharon gave his life to Israel - to bring it into being, to sustain and preserve it, and at the end of his long service, to create a new political party committed to both a just peace and lasting security. It was an honor to work with him, argue with him, and watch him always trying to find the right path for his beloved country," said former President Bill Clinton and former Secretary of State Hillary Clinton.

The current secretary of state was more effusive in his praise, releasing a long statement "marveling at his commitment to cause and country."

"I will never forget meeting with this big bear of a man when he became Prime Minister as he sought to bend the course of history toward peace, even as it meant testing the patience of his own longtime supporters and the limits of his own, lifelong convictions in the process. He was prepared to make tough decisions because he knew that his responsibility to his people was both to ensure their security and to give every chance to the hope that they could live in peace," said John Kerry in a statement.

Kerry makes it clear he "admired the man who was determined to ensure the security and survival of the Jewish State" and "surprised many in his pursuit of peace."

Earlier this week, Kerry wrapped up his 10th visit to Middle East as he pushes hard to help broker that peace.

"I join the people of the Jewish state of Israel in mourning the loss of Ariel Sharon, one of the greatest warrior-statesmen in modern history. Sharon’s contribution to establishing and defending Israel’s independence is incalculable and his devotion to peace undisputed," said House Speaker John Boehner, R-Ohio.

"He was a giant as a leader of Israel, a skilled warrior in battle and a valued friend of our nation. The United States and Israel are stronger partners in peace because of his efforts, and his loss is a great one. Our nation mourns his passing and joins Israel in honoring his tremendous legacy of independence, strength and peace," said House Majority Leader Eric Cantor, R-Virginia.

Arizona Republic Sen. John McCain said: “Few people in our world have done as much for their countries as Prime Minister Sharon did for his beloved Israel. Few soldiers have fought as selflessly to protect their fellow citizens. Few leaders have shown themselves equal to challenges that were as dire to their nation's existence. And few statesmen have made sacrifices that were as difficult, and were prepared to make more painful sacrifices still, for the sake of peace and the security for their nation.”

"I was honored to know this man of courage and call him friend. He was a warrior for the ages and a partner in seeking security for the Holy Land and a better, peaceful Middle East," said former President George W. Bush.

Bush's own secretary of state, Condoleezza Rice, also grieved "a good friend of the United States."

"Ariel Sharon was a loyal and a fierce defender of peace and prosperity for the Jewish democratic state of Israel. I admired and respected him for his passion and courage," she said, adding, "He will be missed, but never forgotten."

Despite the many tributes, some took the occasion to criticize Sharon - and accuse him of war crimes and crimes against humanity.

"Ariel Sharon died without facing justice," said the group Human Rights Watch in a statement, citing his role in expanding settlements into Palestinian territory and the 1982 massacre of hundreds of Palestinians in the Lebanese refugee camps Sabra and Shatila. Sharon was held indirectly responsible for the deaths by an Israeli inquiry in 1983.

“It’s a shame that Sharon has gone to his grave without facing justice for his role in Sabra and Shatila and other abuses. His passing is another grim reminder that years of virtual impunity for rights abuses have done nothing to bring Israeli-Palestinian peace any closer,” said Sarah Leah Whitson, Middle East and North Africa director at Human Rights Watch. "For the thousands of victims of abuses, Sharon’s passing without facing justice magnifies their tragedy."