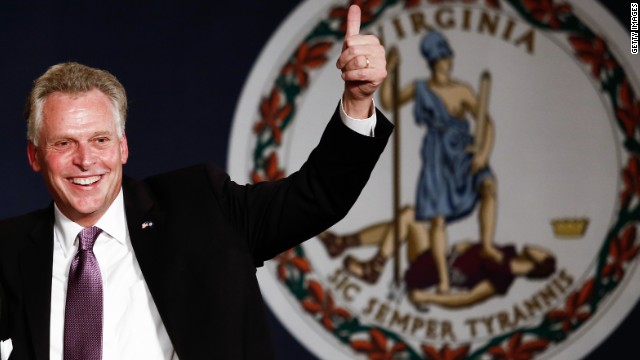 The executive order signed by McAuliffe Saturday establishes a gift limit of $100 for all administration officials and their families, including the governor himself. It also creates a three-person ethics commission to enforce the limit and determine whether particular gifts are acceptable.

[twitter-follow screen_name='politicalticker']
“Virginians have placed great trust in their elected officials and expect transparency and decision-making that avoids improper conflicts,” McAuliffe said in a statement. “This Executive Order will assure citizens of the Commonwealth that members of my Administration will be held to the highest of ethical standards."

The former Democratic National Committee chief made clear that ethics reform was one of his priorities in his inaugural address as well, calling on the state's General Assembly "to enact the strongest possible new ethics rules to hold all Virginia elected officials to the highest of standards," according to his prepared remarks.

McAuliffe was sworn in Saturday morning at the state capitol in Richmond. Among those in attendance were former President Bill Clinton and former Secretary of State Hillary Clinton, longtime allies of McAuliffe’s for whom he used to fundraise. Both Clintons campaigned for McAuliffe this past fall.

His ethic reform decision comes on the heels of a scandal that engulfed the previous governor, Bob McDonnell.

Once a rising star in the GOP, McDonnell's stellar record was tarnished when the federal government began investigating him and his family last summer for improper gifts.

The first family received hundreds of thousands of dollars, a Rolex watch, and other gifts from Jonnie Williams, Sr., the owner of a dietary supplement company.

The one-term governor denied any wrongdoing and refused to resign, arguing the money was a loan. He completed his term this year. (Governors in Virginia are limited to a single term.)

No charges have been brought against McDonnell. He apologized in his last State of the Commonwealth address on Wednesday.

"Choices I made were legal, and as several reviews have shown, no person or company received any special benefits during our administration. However, I understand the adverse public impression some of my decisions have left," he said. "Tonight, I say to you, and to all Virginians, that I am deeply sorry for the problems and pain I’ve caused this past year."