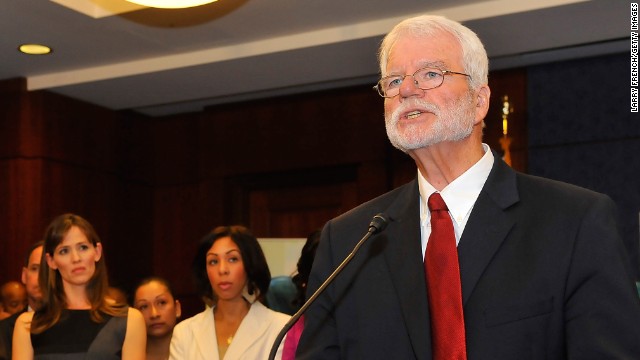 Top Pelosi ally retiring from the House after 40 years

Washington (CNN) - Rep. George Miller of California, a top ally of House Democratic Leader Nancy Pelosi and the dean of the state's congressional delegation, announced Monday he will not run for re-election this fall, marking the end of a 40 year career on Capitol Hill.

"I'm proud of what I have been able to accomplish on behalf of children, working people and the environment, in my district and for our country, especially passage of national health care reform. Now, I look forward to one last year in Congress fighting the good fight and then working in new venues on the issues that have inspired me," Miller said in a written statement.

Pelosi released a lengthy statement touting Miller's accomplishments over the last four decades, including chairing three separate House committees, and serving as the co-chair of the Democratic Steering and Policy Committee, a leadership post appointed each session.

"My sadness at his departure from Congress in 2015 is mitigated only by my certainty that he will utilize his exemplary knowledge and skills in a new venue where he will surely again be a successful leader for our state and our nation," Pelosi said.

Miller, 68, serves as the top Democrat on the House Education and the Workforce Committee, a panel he chaired when the Democrats controlled the chamber. He has built a record as a top progressive in the House, but Miller worked closely with Rep. John Boehner, who was the top Republican on the education committee, and the late Sen. Ted Kennedy, to pass the education reform bill known as "No Child Left Behind" in 2002. He also worked on student loan bills, health care reform, and several measures aimed at protecting labor rights.

“No one would confuse me and George Miller for ideological soul mates, but during our years serving together on the Education & the Workforce Committee, we got things done on behalf of the American people thanks in no small part to his dedication and willingness to work for the greater good," Speaker Boehner said in a statement. "I have great respect for George, and on behalf of the whole House, thank him for his decades of service and congratulate him on a remarkable career.”

The California Democrat also gained notoriety recently after Amazon launched a television series based on his Capitol Hill house, called "Alpha House," which chronicles the escapades of four fictional GOP Senators who bunk together when working in Washington, D.C.. Miller owns the real life version just blocks from the Capitol, and rents out rooms to two top Senate Democratic Leaders – Sen. Dick Durbin, D-Illinois, and Sen. Chuck Schumer, D-New York. Despite the top leadership posts held by its residents, the dilapidated house resembles the kind of group house shared by many twenty-something junior congressional aides.

Schumer tweeted out a notice he's looking for a new house mate: "Seeking roommate. 20 terms in the House & unmatched legislative record preferred. Lover of cold cereal a must."

To date nine House Republicans and four House Democrats have announced retirements ahead of this fall's midterm elections. Democrats would need to pick up 17 House seats to regain control of the House of Representatives, something most political analysts say is now out of their reach due to the low number of competitive races.