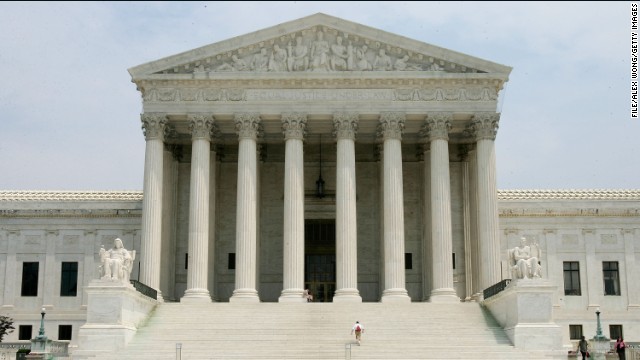 (CNN) - Supreme Court appeared on Monday to lean toward Congress in the fight over presidential recess appointments – those placed in top government jobs temporarily without Senate approval.

It’s a high-stakes constitutional and political confrontation over a practice that has accelerated in recent years due to partisan gridlock in Congress.

Moreover, a ruling by the court against the Obama administration could invalidate hundreds of decisions by the National Labor Relations Board – the federal agency at the center of this legal storm.

At issue is whether three people named by President Barack Obama to NRLB were ineligible to serve because their appointments were made while Senators were out of town on a holiday recess two years ago, but the chamber remained technically in a “pro forma” session.

The Constitution allows a President to make appointments during a recess. But more recently, lawmakers have sought to thwart certain appointments by never technically shutting down the Senate.

The labor board fight is also “ground-zero” in the pitched partisan battle over issues related to organized labor, a major constituent of Democrats.

A federal appeals court one year ago determined the labor board "could not lawfully act” because it did not have a quorum.

Enter Obama and his three appointments – two Democrats and one Republican.

The justices appeared to agree the Senate has the last word deciding when it is and is not in session, but struggled for a solution that would blunt the practical impact nullifying the Board's decisions might have.

"You are making a very, very aggressive argument in favor of executive power now and it has nothing whatsoever to do with whether the Senate is in session or not," Justice Samuel Alito told U.S. Solicitor General Donald Verrilli, representing the administration in oral arguments.

"You're just saying when the Senate acts - in your view - irresponsibly and refuses to confirm nominations, then the President must be able to fill those positions," Aliton said.

Justice Ruth Bader Ginsburg said things have changed from two centuries ago when Congress often went seven months or more without meeting because of the difficulty of travel.

Republicans claimed the appointments to the labor board created a panel that was overly pro-union, and an eventual high court ruling could invalidate hundreds of findings issued over a period of months.

A lawyer for Senate Minority Leader Mitch McConnell of Kentucky and 44 other Republicans were among those making the case directly before the justices.

McConnell and Senators Jeff Sessions and Mike Lee, along with Obama's chief spokesman, Jay Carney, were in attendance at the high court.

The Democrat-controlled Senate changed its rules late last year to make it easier to overcome filibusters and approve presidential appointments.

Obama may now have an easier time of it on his nominees at least, so long as the Democrats maintain control of the Senate in next November’s midterms.

What the high court decides could also put in jeopardy some decisions made by Richard Cordray, appointed at the same time to head the Consumer
Financial Protection Bureau, a move also being challenged in a separate lawsuit.

He served 18 months under a recess appointment before being confirmed to the post by the Senate last July.

In a fascinating 95 minutes of public discussion, the justices debated the competing views of raw power, what it means to have a "recess," and ultimately who gets to decide how the vacancy is filled.

Verrilli began by criticizing the view of Senate Republicans and others, saying they would "repudiate the constitutional legitimacy of thousands of appointments by presidents going back to George Washington, and going forward, it would diminish presidential authority."

But members of the bench of both ideological stripes raised serious concerns.

"You're asking us to peg this on a formality that the Senate could easily evade, and that suggests that it really is the Senate's job to determine whether they're in recess or whether they're not," said Justice Elena Kagan, one of Obama's two appointees to the high court.

Verrilli replied: "The President has got to make the determination of when there's a recess."

"But why? You're making an assumption, which is that the Senate has to take a recess," followed Justice Sonia Sotomayor. "But the Senate could choose, if it wanted to, and I think there might be some citizens that would encourage it to, to never recess."

Sotoamyor, Obama’s first nominee to the high court added those lawmakers could "work every day, which lots of other people do," which brought laughter to the courtroom.

The Senate last year worked only 99 days on legislative business, the lowest non-election year total since 1991.

Some on the court suggested the President's moves were more about politics than moving ahead when a key vacancy suddenly occurs, or in the national interest during a crisis.

Chief Justice John Roberts told Verrilli the framers of the Constitution provided the "President will nominate and the Senate, if it so chooses, can confirm a nominee. You spoke of the intransigence of the Senate. Well, they have an absolute right not to confirm nominees.

"You're latching on to the Recess Appointment Clause as a way to combat that intransigence rather than to deal with the happenstance that the Senate is not in session when a vacancy becomes open."

The high court has never before addressed the recess appointment issue, and Justice Stephen Breyer, in researching the history, said, "I can't find anything that says the purpose of this clause has anything at all to do with political fights between Congress and the President. To the contrary, [Alexander] Hamilton says that the way we're going to appoint people in this country is Congress and the President have to agree.

"Now, that's a political problem, not a constitutional problem, that agreement. And it was just as much true of President George [W.] Bush ... as it is with President Obama."

Much of the argument centered on whether the President or the Senate could abuse its competing powers. Both sides offered worse-case scenarios, which some on the court tried to temper.

"Your argument would destroy the recess clause," Ginsburg told Noel Francisco, lawyer for a private company challenging the NLRB appointments. "Under your argument, it is totally within the hands of the Senate to abolish any and all recess appointments."

Some GOP lawmakers also accused the President of flip-flopping on the issue. When he was a senator, Obama criticized then-President Bush's recess appointment of John Bolton as U.S. ambassador to the United Nations.

Cordray was named the same day as the three NLRB appointments, which gave the board a full panel for the first time in a year.

The lawsuit was brought by Noel Canning, a family-owned Yakima, Washington, bottling company, which complained the NLRB improperly ruled in favor of Teamsters Local 760 during contract negotiations. Company executives said the board lacked a binding quorum because the recess appointments made by Obama were not legal.

Since May 2011, Republicans have been relying on a little-known procedure to keep the Senate in session, even when it was not really conducting any business - in order to stop the president from making those recess appointments.

The legal basis comes from a 1993 Department of Justice brief saying the president should act only if the Senate is in official recess more than three days.

So, party leaders had arranged for a single Republican lawmaker to show up every three days and gavel the Senate to order, wait around for a while, gavel it to a close, then leave.

Legal experts have disagreed on both the tactical and timing procedures by the Senate, and whether the president has unilateral authority to override those legislative tactics.

The case to be decided by the high court is NLRB v. Noel Canning (12-1281). A ruling is expected by early summer.