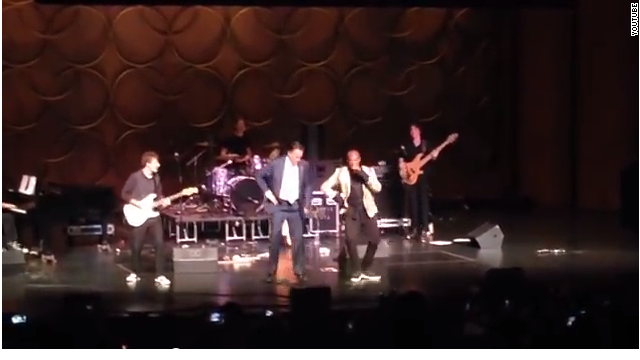 (CNN) - Former Republican presidential nominee Mitt Romney stepped out of character this weekend, hopping on stage at a concert in Arizona and attempting the Gangnam style dance move.

Performer Alex Boye, British-born and a Mormon, coaxed the former Massachusetts governor into the spotlight for an impromptu dance lesson at a regional conference for young adults in The Church of Jesus Christ of Latter-Day Saints in Arizona over the weekend.

Boye tweeted Monday a YouTube video of the two sharing the stage.

"So this weekend I taught Mitt Romney the Gangnam Dance....."

So this weekend I taught Mitt Romney the Gangnam Dance..... https://t.co/g7emInxCRb

According to the Deseret News, Romney also spoke at the conference held at Arizona State University.