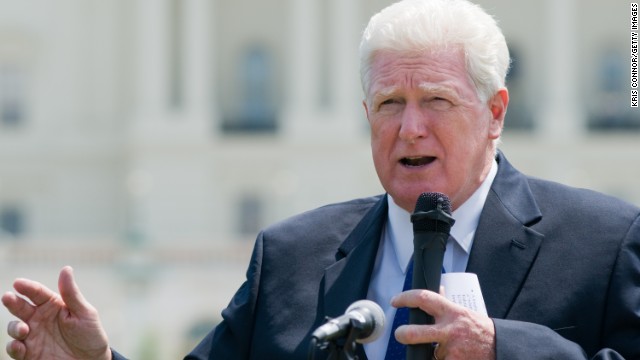 Longtime Democrat to retire from House

Washington (CNN) - Add another name to the growing roster of House members retiring at the end of the year rather than running for re-election.

Twelve-term Democrat Jim Moran of Virginia announced Wednesday that he plans to retire at the end of 2014.

"After 35 years as a public servant, as Mayor of Alexandria, and for the past 23 as a member of the House of Representatives, it's time to close this chapter of my life and move on to the next challenge. It's been an honor to represent Northern Virginia. I couldn't be more fortunate to have spent my career working with such wonderful people trying to make this one of the best places in the world to live, work and raise a family," Moran said in a statement.

Nine Republicans and now six Democrats in the House have announced they will retire rather than run for re-election in November. That count does not include lawmakers who've already resigned or have died in office.

Democrats need to win a challenging 17 seats to regain control of the House for the first time since they lost the chamber in the 2010 midterm elections.

The Buffalo, New York-born Moran, who's 68, moved to northern Virginia nearly three and a half decades ago. In Congress, he's spent much of his efforts on appropriations. He's currently the ranking Democrat on the House Appropriations Committee's interior subcommittee and a senior member of the defense subcommittee.

Moran is known for speaking his mind. He was arrested alongside actor George Clooney and others as they protested outside the Sudanese Embassy in 2012.

In the 1990's, he was critical of President Bill Clinton during the Monica Lewinsky scandal, but he ended up voting against impeachment. And last decade, he was an outspoken critic of the Iraq War.

Moran represents his state's eighth congressional district, which covers northern Virginia's inner suburbs just outside of the nation's capital. The district is dominated by Democrats and the seat is considered safe.