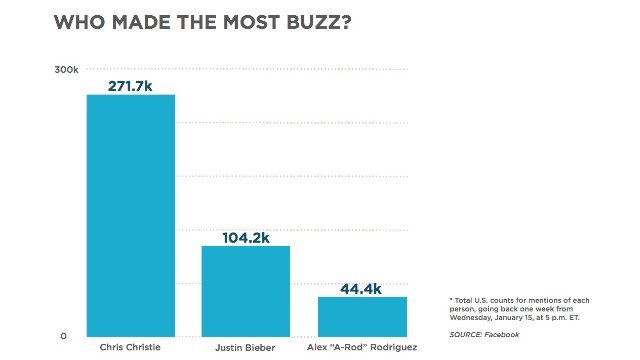 According to Facebook search data, “Chris Christie” was mentioned in Facebook posts, messages and comments more than 271,000 times from last Wednesday to this Wednesday. “Justin Bieber” had 104,000 mentions and “A-Rod” scored 44,000.

Scandals put the big stars of politics, pop and sports in the spotlight this week.

Christie, a likely Republican presidential contender in 2016, has dominated the news cycle since it was revealed last Wednesday that members of his staff may have closed access lanes to the George Washington Bridge for political reasons. The next day, Christie faced reporters for nearly two hours, saying he was “blindsided,” “embarrassed,” and “humiliated.” The story continued Friday after more than a thousand pages of documents relating on the bridge closure investigation. Things didn’t get better for Christie on Monday, when CNN’s Chris Frates broke the story that Christie was being investigation for misuse of Hurricane Sandy funds.

Christie tried to move past the scandals on Tuesday in his annual State of the State address, addressing the controversy before getting to his New Jersey agenda for the next year.

As for Bieber, his latest scandal broke Tuesday when sheriff’s deputies raided his Los Angeles mansion looking for clues after his neighbor’s house was egged. Bieber’s houseguest, a rapper named ‘Lil Za’ was arrested on drug charges during the search. This is just the latest in what’s been a rough year for the 19-year-old superstar. Bieber was accused of spitting on a neighbor in March, speeding through his residential neighborhood in May, and urinating in a janitor’s mop bucket in July.

Yankees third basemen Rodriguez didn't have a great week, either. An arbitrator Saturday upheld most of his 211-game doping suspension, keeping him out of the entire 162-game regular season and postseason in 2014. The ruling could cost Rodriguez $25 million of his salary.

Mentions of Christie, Bieber and A-Rod also spiked on Twitter in the last week, according to data from Topsy.com. Bieber, who has the second-most followed account on Twitter, is consistently a top topic on Twitter, even in a scandal-free week. Nonetheless, Christie topped Bieber on Friday in Twitter mentions. But by the end of the week, Bieber was back on top.