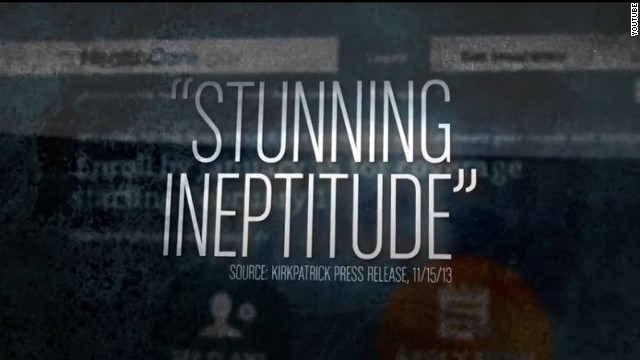 "Rep. Ann Kirkpatrick blew the whistle on the disastrous healthcare website, called it 'stunning ineptitude,' and worked to fix it," the narrator says in the ad.

The spot was released by House Majority PAC, a group that's trying to help Democrats retake control the House of Representatives.

Following the bungled launch of HealthCare.gov and declining approval ratings for the President, one of the big questions for the 2014 midterm elections became how vulnerable Democrats will address the new health care law.

"There is no doubt that our failure to roll out the ACA smoothly has put a burden on Democrats, whether they're running or not, because they stood up and supported this effort through thick and thin," the President said at a November press briefing.

Obama added that he felt "deeply responsible for making it harder for them rather than easier for them."

While the ad points out the shaky rollout of the marketplace, it endorses the law's provision that requires insurance companies to cover people with preexisting conditions.

Kirkpatrick represents Arizona's First Congressional District, a vast area that covers the northeast part of the state. It's one of the targeted seats that Republicans are hoping to turn red.

Kirkpatrick was first elected to Congress in 2008, but lost re-election in 2010 in large part due to her support for Obamacare. After the districts were redrawn, she ran again in 2012 and won.

Republicans were quick Thursday to highlight the new spot's criticism of Obamacare.

"So are Democrats finally admitting ObamaCare is a failure?" the National Republican Congressional Committee wrote in a blog post.

Quentin Cantu, a researcher at the Republican super PAC America Rising, tweeted: "House Majority PAC running ads on "disastrous" ObamaCare rollout. This is what @NancyPelosi meant when she said that they would run on it?"

"The level of foaming-at-the-mouth fervor from Republicans obviously shows just how effective the ad is," he said.

"The bottom line is the critical new protections put in place would disappear and insurance companies would be put back in charge of health care decisions under the Republican repeal plan."

The commercial will run for a week in Arizona starting Friday.