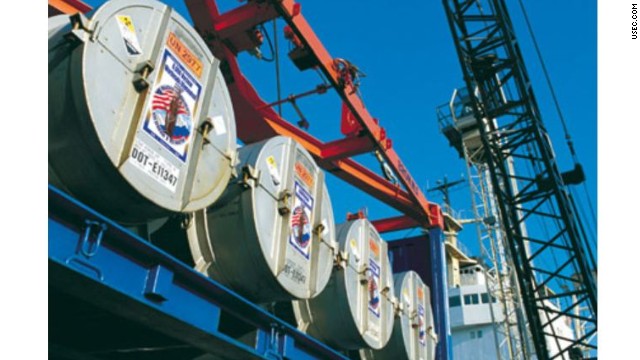 Ryan Alexander with Taxpayers for Common Sense, a government watchdog, points out USEC is in such dire straits the company's stock was nearly de-listed by the New York Stock Exchange last year.

That was not the company's only setback in 2013. USEC also closed its only functioning uranium enrichment plant, an outdated facility located in Kentucky that dates back to the early years of the Cold War.

"If you just look at the facts it seems absurd that we continue to throw money at a company that's failing, that announces, ‘We're about to declare bankruptcy,’" Alexander said.

USEC, the last remaining American-owned company still in the uranium enrichment business, announced December 16 it planned to file Chapter 11 bankruptcy in the first quarter of 2014.

The company admits it's been hit hard by plummeting demands for nuclear fuel in the aftermath of the disaster at the Fukushima nuclear power plant nearly three years ago. A USEC spokesperson declined a request for an interview. But in a statement provided to CNN, a USEC spokesman said the company appreciates the latest infusion of federal support.

"This funding reflects the continued commitment of Congress and the Administration to the key goal that the United States maintain a domestic uranium enrichment capability with U.S. technology for national and energy security purposes," Paul Jacobson, a USEC company spokesman, said in the statement.

As it turns out, USEC has been a pet favorite of members of Ohio's congressional delegation, most notably Boehner, who appealed to President Obama in 2011 for $2 billion in loan guarantees to the company for a new centrifuge project located near the GOP leader's district.

In the letter addressed to Obama, Boehner drew comparisons with Solyndra, the failed solar power company that was supported by the Obama administration's stimulus program.

“In stark contrast to the ‘stimulus’-centric Solyndra saga, the Piketon project offers the chance to bring thousands of good-paying, long-term jobs to an area suffering from the Buckeye State’s highest jobless rate," Boehner wrote in the 2011 letter.

Asked about the latest funding for USEC in the omnibus spending bill that is expected to be passed in the Senate and signed by the president within days, Boehner suggested the company could emerge as a success story after bankruptcy.

"People can file for bankruptcy to reorganize their company," Boehner said at a news conference Thursday. "This USEC issue in Ohio is a uranium enrichment facility with new technology. There's been a bipartisan effort to proceed with this research that they're doing.”

The Obama administration has its own ties to USEC's new Ohio project, known as "The American Centrifuge." In addition to the $62 million authorized in the omnibus spending bill, USEC could tap into another $52 million in 2014 if the company can meet certain criteria set by the Department of Energy, under an agreement with the administration.

In his 2011 letter to the President, Boehner noted Obama pledged his support to the program as a candidate in his first run for the White House in 2008.

Coincidentally, the administration's new Secretary of Energy, Ernest Moniz once served on a USEC advisory board.

What about national security?

USEC officials caution their very survival has an impact on national security, arguing with its plant closing last year the U.S. no longer has a current domestic supplier of uranium. The company supplies the government with Tritium, a necessary component in the maintenance of the nation's nuclear arsenal.

This question of national security is one that taxpayer advocate Ryan Alexander has frequently asked of government officials.

But she argued the government's inability to find an alternative to funding a failing company is hardly an acceptable response.

"If it isn't commercially viable and the market says 'we're not going to support you,' I don't think the government should be supporting it," she added.