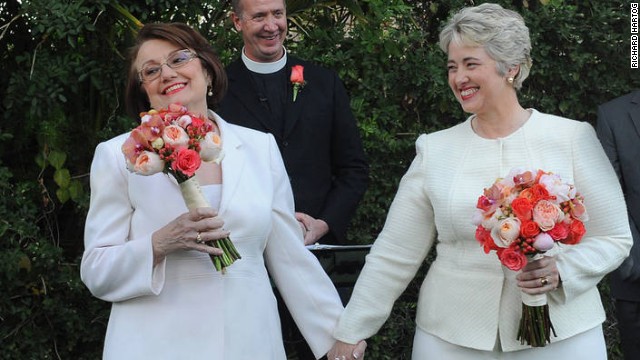 Parker's office said the sunset ceremony took place at a private home in Palm Springs among a small gathering of family and friends. Rev. Paul Fromberg, a family friend from San Francisco, presided over the ceremony.

“This is a very happy day for us,” Parker said in a statement.

“We have had to wait a very long time to formalize our commitment to each other. Kathy has been by my side for more than two decades, helping to raise a family, nurture my political career and all of the other ups and down and life events that come with a committed relationship. She is the love of my life and I can’t wait to spend the rest of my life married to her.”

Parker also tweeted: "I am privileged to now be the wife of the woman I have loved for more than 2 decades. I couldn't be happier. We said our vows today.-A"

I am privileged to now be the wife of the woman I have loved for more than 2 decades. I couldn't be happier. We said our vows today.-A

"Mayor Parker is an extraordinary leader for freedom and justice for all," Rea Carey, Executive Director of the National Gay and Lesbian Task Force, said Friday, congratulating the couple and praising Parker's leadership as mayor.

Parker, a Democrat, easily won reelection to her third, two-year term as mayor in November, grabbing more than fifty percent of the vote.

In an interview with CNN Chief National Correspondent John King before her reelection, Parker said she hoped to get married in her home state.