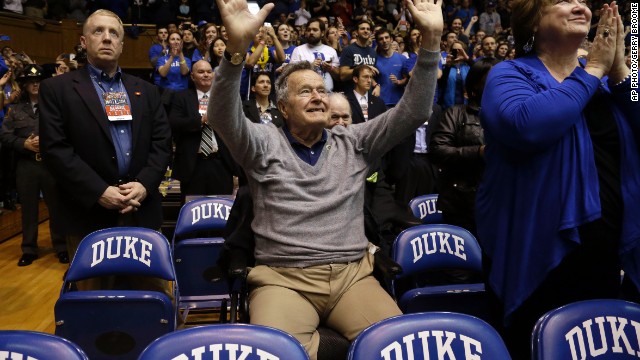 (CNN) - Duke trounced North Carolina State in Saturday's basketball game, but the crowd favorite was former President George H. W. Bush who was greeted with a standing ovation and chants of "USA."

The 41st president is 89 and has faced health problems in the last few years that make it difficult to travel.

But he made the trip to Durham, North Carolina, to support Duke coach Michael Krzyzewski, also known as Coach K, for his involvement in cancer research.

Bush celebrated as Duke won 95-60 and took a picture with the Blue Devils in the locker room after the game.

Bush is the founder and co-chairman of the CEO Roundtable on Cancer, an organization that challenges executives to reduce the cancer risk of employees and their families.

The organization's website states that Coach K has been an honorary member since its founding in 2001 and always wears a gold pin on his right lapel to symbolize his commitment to its work.

George Bush, 41st POTUS, is here to honor Coach K for involvement in the CEO Roundtable on Cancer. Also to scout for his NCAA bracket.

Duke's vice president for public affairs and government relations sent a tweet with a picture of the coach and former president.

POTUS and K at @Duke_MBB vs NC State. The Cameron White House is rocking pic.twitter.com/wwvEMWsBkE