DEVELOPING FOR THE LEFT… WENDY DAVIS IN A FIGHT OVER HER OWN BIOGRAPHY … Texas gubernatorial candidate Wendy Davis admitted in an interview with the Dallas Morning News that she hasn't been totally accurate about her life's story, a compelling narrative she has used to appeal to voters in Texas and bolster her national profile. "My language should be tighter," the Democratic state senator said. "I'm learning about using broader, looser language. I need to be more focused on the detail." – CNN’s Ashley Killough

HOMETOWN PAPER’S TAKE: From Wayne Slater of the Dallas Morning News: As Wendy Davis touts life story in race for governor, key facts blurred
While her state Senate filibuster last year captured national attention, it is her biography — a divorced teenage mother living in a trailer who earned her way to Harvard and political achievement — that her team is using to attract voters and boost fundraising.

SOCIAL WATCH: #MoreFakeThanWendyDavis has been trending in the U.S. on Twitter since 11:30am, with nearly 10,000 mentions on Twitter according to Topsy. Over on Facebook, Wendy Davis is also a trending topic with more than 14,000 mentions so far today. – CNN’s Eric Weisbrod

LIMBAUGH WATCH: RUSH LIMBAUGH ON HIS NATIONALLY SYNDICATED RADIO SHOW: “It seems, when you boil it all down, that Wendy Davis would have ended up being really poor and destitute were it not for a man, but that's no problem. They just made stuff up. It worked for Obama. … She's a liberal Democrat. They make things up. They lie, just like Hillary and Obama lied about a video in Benghazi.”

DEVELOPING FOR THE RIGHT … MORE NEW JERSEY SHE SAID, SHE SAID: Hoboken Mayor Dawn Zimmer said Lt. Gov. Kim Guadagno approached her in a parking lot last May and said her community would not receive Superstorm Sandy relief funds unless she backed a redevelopment program proposed by a group with ties to Christie.
Guadagno addressed Zimmer's version of the conversation on Monday at a Martin Luther King Jr. holiday service project, calling them "not only false, but illogical."

Shortly after Guadagno spoke, Zimmer released a statement saying, "I met with the U.S. Attorney for over two hours yesterday, answered all their questions and turned over my journal in which I described my conversation with the Lieutenant Governor and Commissioner Constable. I stand by my word, remain willing to testify under oath, and I will continue to answer any questions asked of me by the U.S. Attorney's office." – Leigh Ann Caldwell

QUOTE OF THE DAY … GOES TO VICE PRESIDENT BIDEN (AGAIN): At the National Action Network Annual Martin Luther King Jr. Day Breakfast: “We may not be black, but I'll tell you what: We're Irish and we know how to fight.”
END_OF_DOCUMENT_TOKEN_TO_BE_REPLACED

A Pew Research Center/USA Today poll released Monday indicates that half of respondents have not heard anything about the President's proposed changes. Forty-one percent said they were somewhat familiar with the reforms and only 8% said they had heard a lot.

END_OF_DOCUMENT_TOKEN_TO_BE_REPLACED

Poll: Negative views of Christie on the rise

(CNN) - Unfavorable opinions of Chris Christie have doubled over the past year, according to a new national poll.

A Pew Research Center survey released Monday also indicates that a majority who've heard about the George Washington Bridge controversy say that they don't believe the New Jersey governor when he says he wasn't aware of his aides alleged involvement in the closing of access lanes to the nation's busiest bridge, causing massive traffic jams in Fort Lee, New Jersey.
END_OF_DOCUMENT_TOKEN_TO_BE_REPLACED

(CNN) - Former Alaska Gov. Sarah Palin reposted a quote from Martin Luther King, Jr.'s famous "I Have A Dream" speech on Monday–and took a swipe against President Barack Obama at the same time.

"Mr. President, in honor of Martin Luther King, Jr. and all who commit to ending any racial divide, no more playing the race card," she said in a Facebook post Monday, a holiday that marks the civil rights icon's birthday.
END_OF_DOCUMENT_TOKEN_TO_BE_REPLACED

Race is on for open U.S. Senate seat in Oklahoma

(CNN) - A two-term Republican congressman and rising star in the GOP announced Monday that he's running in a special election this year for the U.S. Senate seat in Oklahoma that's opening up due to Sen. Tom Coburn's retirement.

The move by Rep. James Lankford follows by a day the announcements from two other Oklahoma Republicans that they would not be making Senate bids.

END_OF_DOCUMENT_TOKEN_TO_BE_REPLACED 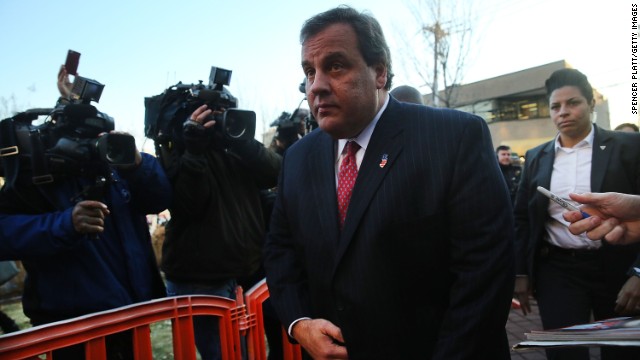 Christie not mad about Springsteen parody

In an interview with Yahoo News' Matt Bai published Monday, Christie said he received a message from Fallon saying the skit was all in good fun, and Christie's oldest son told him, "It's actually kind of cool to have Bruce saying your name."

For his part, Christie said he hasn't even watched the performance.
END_OF_DOCUMENT_TOKEN_TO_BE_REPLACED

(CNN) – Texas gubernatorial candidate Wendy Davis admitted in an interview with the Dallas Morning News that she hasn't been totally accurate about her life's story, a compelling narrative she has used to appeal to voters in Texas and bolster her national profile.

"My language should be tighter," the Democratic state senator said. "I'm learning about using broader, looser language. I need to be more focused on the detail."
END_OF_DOCUMENT_TOKEN_TO_BE_REPLACED

"Mayor Zimmer's version of our conversation in May of 2013 is not only false but is illogical and does not withstand scrutiny when all of the facts are examined. Any suggestion that Sandy funds were tied to the approval of any project in New Jersey is completely false," she said at a Martin Luther King Jr. holiday event in Union Beach, New Jersey.
END_OF_DOCUMENT_TOKEN_TO_BE_REPLACED

(CNN) - Chris Christie told a large group of Republican donors that he's "being tested" by a couple of controversies that have the embattled New Jersey governor fighting to regain his political momentum.

Christie's comments came Sunday night, as he met with some of the GOP's top financial backers, a meeting that could be critical for Christie as he seriously considers a run for the White House in 2016. And according to one attendee at the private get-together at the home of Home Depot co-founder Ken Langone, Christie was received warmly by the donors.