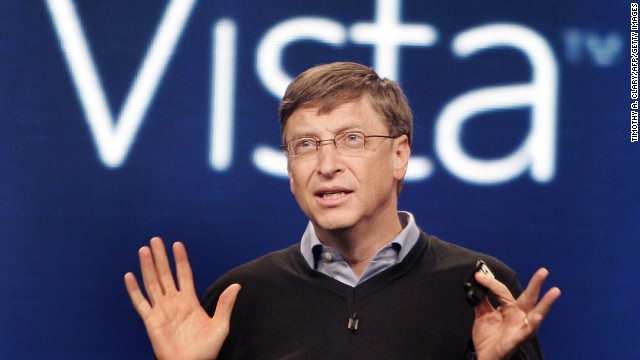 "It's an experiment, and it's probably good to have a couple states try it out to see before you make that national policy," he said in the interview Tuesday.

Washington was one of three states that voted on marijuana laws in 2012. Colorado also voted in favor of legalization and began implementation at the beginning of this year. In Oregon, voters defeated a ballot initiative that would have allowed the commercial cultivation and sale of marijuana to adults.

Gates, chairman of Microsoft and co-chairman of the Bill & Melinda Gates Foundation, said he didn't actually expect the law in Washington to pass but added "it will be interesting to see" how it plays out when it takes effect later in 2014.

BuzzFeed reports that Gates did not say whether he has smoked pot, but the article notes that the Marijuana Policy Project ranks him as an "influential marijuana user," citing a 1994 biography written about Gates that claims marijuana was his "Pharmaceutical of choice."

Gates said there are still several questions to be answered about the legalization of pot.

"Can they keep it out of minors' hands? Will it reduce alcohol consumption? Are there some people who use it at levels you might think of as inappropriate? Will drug gangs make less money?" he asked.

Another advantage, he said, could be that traffickers "are going to make a lot less money, and some of the perverse things about the illegal drug trade will be avoided."

With his comments, Gates becomes another high-profile figure who has offered tolerance or support for recreational marijuana.

President Obama, though he doesn't favor making changes to federal law, said in a recent New Yorker interview that the laws in Colorado and Washington are "important" because they decriminalize a commonly used substance.

"As has been well documented, I smoked pot as a kid, and I view it as a bad habit and a vice, not very different from the cigarettes that I smoked as a young person up through a big chunk of my adult life. I don't think it is more dangerous than alcohol," Obama told the weekly magazine.

The president said pot was actually less dangerous than alcohol "in terms of its impact on the individual consumer."

"It's not something I encourage, and I've told my daughters I think it's a bad idea, a waste of time, not very healthy," he said.

He added the laws could raise questions for other illegal substances.

"If marijuana is fully legalized and at some point folks say, Well, we can come up with a negotiated dose of cocaine that we can show is not any more harmful than vodka, are we open to that?" Obama wondered. "If somebody says, We've got a finely calibrated dose of meth, it isn't going to kill you or rot your teeth, are we O.K. with that?"