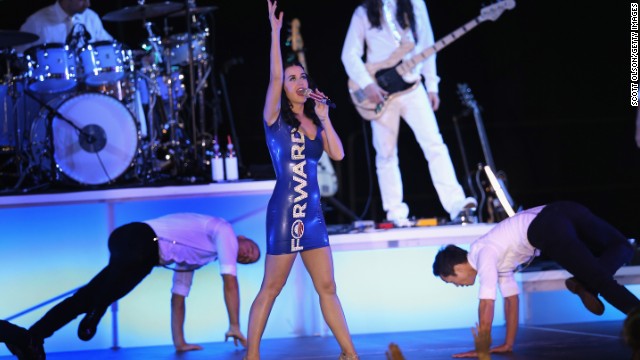 "I might have won Wisconsin for him," the singer said. "Actually, I didn't do too much, but he called on me a couple of times. Which was very nice."

A high-profile supporter of the President, Perry performed at a rally in Milwaukee two days before last year's election, clad in a tight blue mini dress with Obama's campaign logo. Obama won the Badger State with 51% of the vote to Republican presidential nominee Mitt Romney's 47%.

Perry told GQ she's a believer in astrology and extraterrestrial life, and would like to have a conversation with Obama about the issue when the time's right.

"I see everything through a spiritual lens," she said. "I believe in a lot of astrology. I believe in aliens."

Perry continued: "I look up into the stars and I imagine: How self-important are we to think that we are the only life-form?"

"I mean, if my relationship with Obama gets any better, I'm going to ask him that question. It just hasn't been appropriate yet."