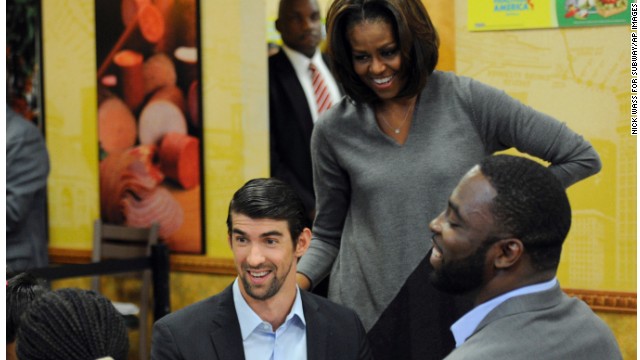 Washington (CNN) – First Lady Michelle Obama ate lunch at a Subway sandwich shop Thursday to thank the chain for launching a new healthy food program aimed at kids. She announced the chain had taken up her challenge to offer healthier food choices and stop marketing unhealthy foods to children.

At the event, Subway announced that as of February 1, it would only offer items on its kids menu that meet federal nutritional guidelines for school lunches. They also promise to offer children healthy choices and sides that would include apples instead of chips, and drinks like water or low fat milk instead of sodas.

The chain says that it will commit to a three-year marketing initiative that will encourage kids to make healthy choices.

"When companies see that we're going to buy this stuff, then they'll keep making it," the first lady said. "Their argument is, 'We're making what people want,' and they're never going to stop making what we want if we keep just buying stuff that's not healthy."

Obama was joined by Olympic athletes, and Subway endorsers, Michael Phelps, Nastia Lukin and Justin Tuck. Lukin helped make the first lady's sandwich, which was turkey on whole wheat with extra veggies, hot peppers, oil and vinegar. After eating her sandwich, Obama spent time working the room, chatting with kids and the athletes about the importance of eating well and exercise.

She challenged companies to "lead the way in creating demand for healthy foods so that kids actually start pestering us for those foods in the grocery store."

"In a decade or so, we would see a dramatic shift across the entire industry," she added. "We'd see companies shifting marketing dollars away from those less healthy products and investing those dollars in your healthier products instead."