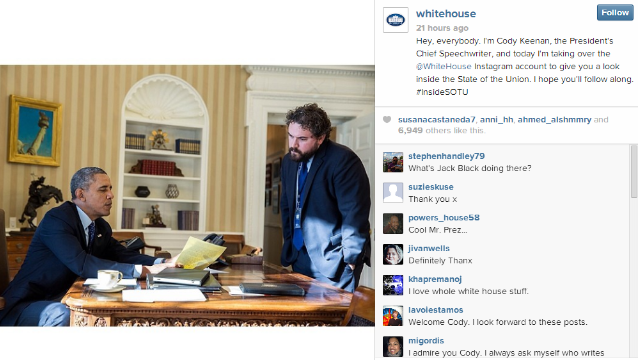 Washington (CNN) – Just days before President Barack Obama gives his annual State of the Union address, the White House is offering a rare look at the preparations for the speech.

The President's chief speechwriter, Cody Keenan, used the White House's Instagram account on Wednesday to release several pictures of the process that goes into writing the speech. Obama senior adviser Valerie Jarrett continued the behind-the-scenes look on Thursday with pictures listed under #InsideSOTU on Instagram as well as Twitter.

In one picture, Keenan posted a blurry picture of the President's text, complete with visible edits and revision marks. In another, a speechwriter, only identified as Laura, is pictured on the phone asking someone for permission to use a letter that person wrote to Obama.

Tuesday's speech will be Obama's fifth State of the Union address where he will lay out his agenda for the year. In recent weeks, he's referred to 2014 as the "Year of Action" where he's laid out his economic agenda for job creation and economic security. Economic issues are expected to be only part of the annual speech.

The Instagram pictures are not the only examples of social media the White House is using for next week's speech.

Google announced that Obama will participate in a "virtual whistlestop tour" with several Google+ Hangouts on Friday to discuss the issues mentioned in Tuesday's speech. Google is calling the event a "Presidential Hangout Road Trip" and is encouraging users with questions for the President to submit videos to YouTube or Google+ with the hashtag #AskObama2014.