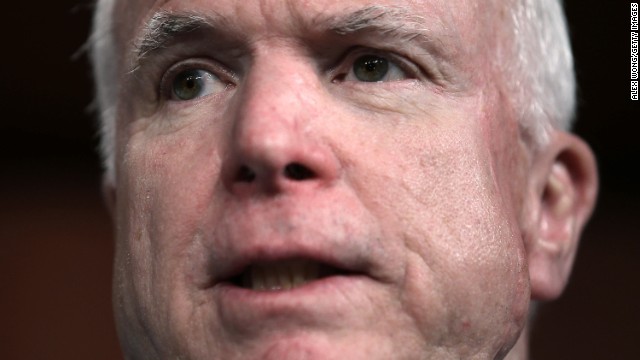 The voice vote Saturday came from the floor at the party’s meeting in Tempe. While the resolution does not have an impact on McCain’s work in Congress, the party pledges it would not support, campaign for or endorse the Republican senator.
END_OF_DOCUMENT_TOKEN_TO_BE_REPLACED

(CNN) - Rep. Paul Ryan, a Republican from Wisconsin and former Republican vice presidential candidate, distanced himself from one of the most conservative leaders of his party and expressed reluctant support for one of its most embattled figures.

At the San Antonio Hispanic Chamber of Commerce, Ryan took a swipe at Sen. Ted Cruz, R-Texas, for not recognizing "reality" and, when pressed, expressed moderate support for Gov. Chris Christie, R-New Jersey.

The chairman of the House Budget Committee and potential presidential contender in 2016 made the comments in a one-on-one conversation with Texas Tribune editor-in-chief Evan Smith on Thursday.

END_OF_DOCUMENT_TOKEN_TO_BE_REPLACED

Washington (CNN) - "I am not a member of any organized political party," Will Rogers once joked. "I am a Democrat."

Plenty has been written on the current fight for the soul of the Republican Party. But as President Barack Obama unofficially rings in the sixth year of his administration with Tuesday's State of the Union address, another intriguing struggle may be emerging - between moderates and progressives on the Democratic side.

(CNN) – The Russian ambassador to the U.S. said Sunday he’s “absolutely certain” the Olympic Games in Sochi next month will be safe from terrorist attacks. He pushed back against reports of a “black widow” threat.

“There was a report of some notice that (was) circulated as a kind of lookout information. It doesn't necessarily mean that there is an immediate threat,” Sergey Kislyak said in an exclusive interview on CNN’s “State of the Union.”
END_OF_DOCUMENT_TOKEN_TO_BE_REPLACED

Those days are over.
END_OF_DOCUMENT_TOKEN_TO_BE_REPLACED

"I don't think it's confrontational. It's 'Let's find areas to work together,'" he said Sunday on CNN's "State of the Union." "There are some items right before Congress we can do together."
END_OF_DOCUMENT_TOKEN_TO_BE_REPLACED

(CNN) – Sen. Rand Paul said Sunday that Democrats are failing in their attempts to frame the GOP as a party that wages a war against women, and argued the message comes from the party of former President Bill Clinton, whose reputation is still tarnished from his “predatory behavior” in the Monica Lewinsky scandal.

"The whole thing of the 'war on women,' I sort of laughingly say, 'Yeah, there might have been – but the women are winning it,'" the Republican senator from Kentucky said on CNN's "State of the Union." He said women have made great strides and, as an example, now make up more than half the students at medical and law schools.
END_OF_DOCUMENT_TOKEN_TO_BE_REPLACED

(CNN) – Sen. Rand Paul on Sunday clarified comments he made last week about the government's role in discouraging women from having children out of wedlock as a way to stem poverty.

The Republican senator from Kentucky said on CNN's "State of the Union" that he didn't "come up with a policy prescription," such as limiting government aid, but rather said it's up to communities to resolve the problem, which he called the No. 1 cause of poverty in the country.
END_OF_DOCUMENT_TOKEN_TO_BE_REPLACED