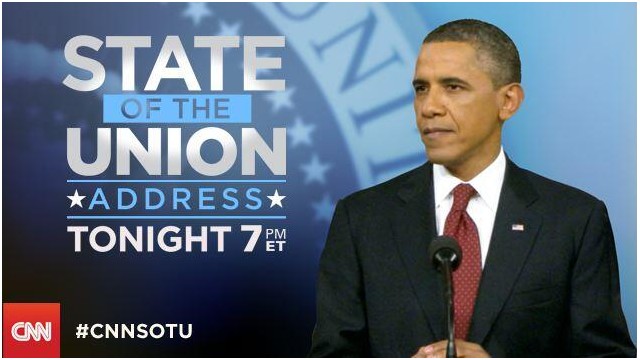 CNN'S SPECIAL COVERAGE OF THE STATE OF THE UNION
STARTS ON TELEVISION AT 7 P.M. ET

CHOOSE YOUR SECOND SCREEN …
Pizza, Wings & the President of the United States: Watch the HambyCast on CNN.com, in which @PeterHambyCNN does political play by play during the speech with @TVietor08 and @Timodc
Liveblog: Follow along CNN’s coverage including notable quotes, tweets and commentary
Tweet of the Union: Follow all of the members of Congress as they tweet, sort by party & gender

A DEFINING MOMENT FOR OBAMA… Three numbers to keep in mind Tuesday night as President Barack Obama delivers his State of the Union address: six, 30 and 43. Six as in the number of seats Republicans need to gain this November to take control of the Senate. 30: The historical average of House seats gained by the other party - in this case the Republicans - in a two-term president's "six-year itch" midterm election. And 43%, of course, is Obama's job approval rating - a reminder that his political standing is weak, though up slightly from its recent low point, as he stands before a closely divided Congress - and country - to lay out his agenda for year six of his presidency. – John King

HOURS BEFORE THE SPEECH, OBAMA INCREASES MINIMUM WAGE FOR FEDERAL CONTRACT WORKERS … The action will cover all workers employed under future government contracts, ensuring that none is paid less than $10.10 an hour. The White House highlighted several occupations that will be helped by the move, including kitchen and laundry workers on military bases, as well as janitors at federal buildings and construction workers at government building sites. – Adam Aigner-Treworgy

BOEHNER WARNS OBAMA HEADED FOR A ‘BRICK WALL’: "This idea that he's just going to go it alone, I have to remind him we do have a constitution. And the Congress writes the laws, and the president's job is to execute the laws faithfully and if he tries to ignore this he's going to run into a brick wall …Were just not going to sit here and let the president trample all over us." – Dana Bash, Candy Crowley and Jake Tapper

- Reid Doubles Down: Candidates should run with Obama -
SEN. HARRY REID IN AN INTERVIEW WITH CNN’S DANA BASH RESPONDING TO A QUESTION ABOUT VULNERABLE DEMOCRATS APPEARING WITH PRESIDENT OBAMA AT CAMPAIGN EVENTS: "Yes and they will.”

Burke spokesman Joe Zepecki tells CNN that Burke will not appear with the president when he goes to Wisconsin on Thursday, "Mary has a full campaign schedule that day in Western Wisconsin."

THE BUZZ: ‘DUCK DYNASTY' IN THE HOUSE
'Duck Dynasty' star Willie Robertson will attend Tuesday night's State of the Union address as a guest of Rep. Vance McAllister. Robertson campaigned for McAllister, the newly elected congressman from Louisiana, last fall. Robertson himself was called on by some in the GOP to run for the seat, but he backed his friend, McAllister, instead. McAllister won the special election in November for Louisiana's 5th Congressional district, a race that pitted two Republicans against each other. – Ashley Killough

TRAIL TRIVIA
(Answer below)
Who was the first person invited to sit in the presidential box during a SOTU address and be used as a prop during the speech?

Leading CNNPolitics.com: White House adds GM exec, immigration activist, Georgia school shooting hero to SOTU guest list
The White House released additional names of guests invited to join the first lady for Tuesday's State of the Union address. Among those attending the speech will be Mary Barra, chief executive officer of General Motors Company and the first woman to run a major global automaker. Antoinette Tuff, a Georgia bookkeeper deemed a hero after talking down a school shooter, will also join the first lady, along with immigration activist Cristian Avila, who joined the fasting protest in Washington last year.

Leading Drudge: APPLE POLAR VORTEX
Apple Inc. reported selling fewer iPhones than projected at year-end and said revenue in the current quarter might decline, sending its shares down sharply in after-hours trading. The results highlighted new dynamics and intensifying competition in the smartphone market. Apple continues to target the market for high-end phones, even as demand accelerates for lower-cost models, particularly in emerging markets. But Apple is resisting the urge to release a truly low-cost phone that could crimp profitability. – Daisuke Wakabayashi

Leading HuffPo: Obama's State Of The Union Guests Still Eager To See His Vision Achieved
In the early winter of 2010, Gabriela Farfan was a freshman at Stanford University planning a career in environmental science. She had been fascinated with the subject since growing up in Madison, Wis. One day, she got a phone call from an unknown number. It was the White House calling to tell her the president wanted her to be a guest of the first family at the State of the Union address. But four years after she attended the State of the Union, Farfan is worried about the state of her field. She currently has a grant from the National Science Foundation (three years at roughly $30,000 a year). But she sees a funding pinch taking its toll. – Sam Stein

Leading Politico: Ryan Loskarn leaves letter
Jesse Ryan Loskarn, the former top Senate GOP aide who committed suicide last week, said in a letter released by his family that he was sexually abused as a child, and the horror from that episode eventually led him down a path toward possessing child pornography. In a typed letter just over two pages long and posted online by his mother late Monday night, Loskarn revealed in vivid detail his personal experiences and apologized profusely for possessing child pornography, which led to his arrest by federal agents on Dec. 11.- John Bresnahan

Leading New York Times: Backing in G.O.P. for Legal Status for Immigrants
The House Republican leadership’s broad framework for overhauling the nation’s immigration laws will call this week for a path to legal status — but not citizenship — for many of the 11 million adult immigrants who are in the country illegally, according to aides who have seen the party’s statement of principles. For immigrants brought to the United States illegally as young children, the Republicans would offer a path to citizenship. – Jonathon Weisman and Ashley Parker

- Coburn ‘My treatment is no longer covered’-
SEN. TOM COBURN, R-OKLAHOMA, ON MSNBC’S MORNING JOE: “I’ve got great docs. Fortunately, even though my new coverage won’t cover my specialist, I have great care and I’m going to have a great prognosis.”

- Palin has McCain’s back -
FORMER ALASKA GOV. SARAH PALIN ON HER FACEBOOK PAGE: "I consider Senator John McCain an American hero and a friend. He fights to remind our President that the federal government's first priority must be strong defense of our homeland … He fights against big-spending colleagues who don't prioritize for our military's needs."

- McConnell: Obama can’t save everyone -
SENATE MINORITY LEADER MITCH MCCONNELL ON THE SENATE FLOOR: “Does he want to be a hero to the left or a champion to the middle class? He can’t be both. He’s got to choose. He can double down on the failed policies that brought us to this point. That would make his base pretty happy I’m sure. But we certainly know where that path leads for the middle class.”

- Whitman on McMorris Rodgers for GOP response: ‘It’s not about the messenger. It’s about the message’ -
FORMER NJ GOV. CHRISTINE TODD WHITMAN IN AN INTERVIEW WITH THE LOS ANGELES TIMES: "It's hard for me to phrase this politely. Sometimes Republicans think that just putting a woman up front means somehow that women are going to feel good about the party. It is not about the messenger. It's about the message. And until we figure that one out, while it's nice that we have a woman as a spokesperson, if the message itself doesn't get changed a bit, it's not going to work. But I think it is an attempt to say we've got prominent, articulate women, and she will certainly fill that role. And that's great. But that's not going to be enough to win over women at the polls.”

Alex Pappas ‏(@AlexPappas)
Rand will say tonight: "Only the democracy of the marketplace can find those capable of creating jobs.” http://dailycaller.com/2014/01/28/what-rand-paul-plans-to-say-in-his-state-of-the-union-rebuttal/#ixzz2rj5Ltiqi …

Mike O'Brien ‏(@mpoindc)
Well, there's some news from Romney on Fox: He said he won't endorse in 2016 GOP primary. Will wait until there's a nominee.

Senator Jeff Merkley (‏@SenJeffMerkley)
Thank you President Obama for raising the wage for federal contract workers. No one should have to raise a family in poverty.

Lenny Skutnik was the first person to be invited to sit in the presidential box as the president’s guest at the State of the Union address and be mentioned by the president in his speech.

Skutnik dove into the Potomac River on January 13, 1982, to save passengers from the Air Florida Flight 90 crash. For his bravery, President Ronald Reagan invited Skutnik to sit with first lady Nancy Reagan in the presidential box during his State of the Union address two weeks later.

Reagan acknowledged Skutnik’s bravery saying, “Just two weeks ago, in the midst of a terrible tragedy on the Potomac, we saw again the spirit of American heroism at its finest the heroism of dedicated rescue workers saving crash victims from icy waters … And we saw the heroism of one of our young Government employees, Lenny Skutnik, who, when he saw a woman lose her grip on the helicopter line, dived into the water and dragged her to safety.”

It has since become a tradition that presidents invite guests to sit in the presidential box during the State of the Union to reward them for their bravery or to use the people as physical evidence, or props, to symbolize a policy point the president is trying to make.