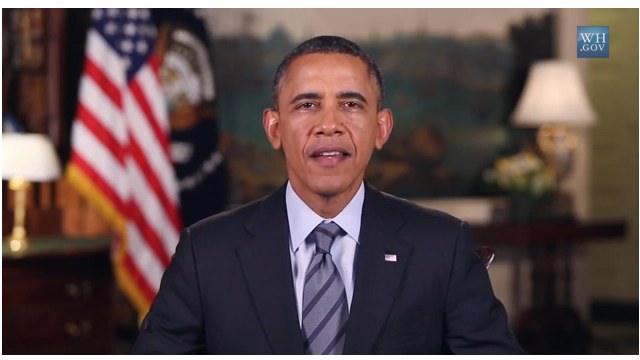 Washington (CNN) - After a week in which he signed executive orders focused on bolstering the middle class, President Barack Obama repeated his State of the Union promise Saturday to act with or without Congress.

In what he termed a "three-minute version" of Tuesday's all-encompassing State of the Union speech, the President promised he would not let his "opportunity agenda" get stalled by a bitterly divided legislative branch, and that "wherever I can take a step to expand opportunity for more families on my own, I will."

"Every single day," Obama said, "I’m going to fight for these priorities - to shift the odds back in favor of more working and middle-class Americans, and to keep America a place where you can always make it if you try."

Though Obama has witnessed the unemployment rate fall to its lowest level in more than five years, average wages have remained relatively stagnant as the gap between the nation's wealthiest and its poorest citizens continues to grow. The President said it is his mission to "reverse those trends."

"Inequality has deepened. Too many Americans are working harder and harder just to get by. And too many still aren’t working at all," Obama said.

In the condensed version of his State of the Union address, Obama touched on four parts of his agenda: spurring job creation, training more Americans for skilled jobs, enhancing access to education and helping make sure Americans save enough money to comfortably retire. Obama said he will ask leaders in business, education and philanthropy to partner with him to advance his agenda, reiterating that wherever he can bypass Congress, he will.

"These ideas will strengthen the middle class and help more people work their way into the middle class," he said.
Despite his repeated assertion that he will use a "pen and a phone" to help achieve parts of his agenda, Obama has not relied on executive orders in the past. He has signed them at the lowest rate since the Grover Cleveland administration and has proved reluctant to test his executive authority.