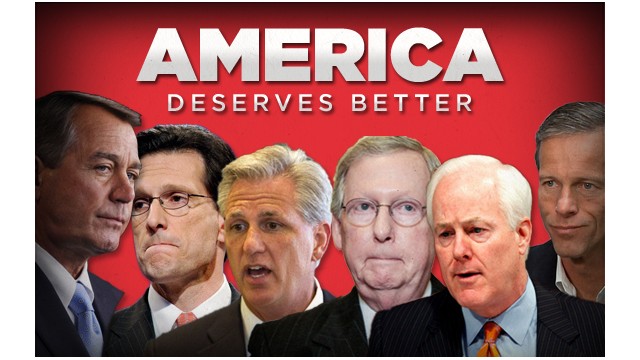 Washington (CNN) - A conservative group is launching a new campaign which calls on "the GOP leadership in both the House and the Senate to step aside."

ForAmerica told CNN that it's putting six figures behind its "Dump the Leadership" campaign between now and November's leadership elections.

"Time and again, year after year, the Republican leadership in the House and Senate has come to grassroots conservatives, and Tea Party supporters pleading for our money, our volunteers, our time, our energy and our votes," said ForAmerica Chairman Brent Bozell in a statement to CNN. "In return they have repeatedly promised not just to stop the liberal assault on our freedoms and our national treasury, but to advance our conservative agenda. It's been years. There is not a single conservative accomplishment this so-called 'leadership' can point to."

ForAmerica, which describes itself as "an online army of over 4.5 million people," is a conservative non-profit group which has often criticized congressional GOP leaders.