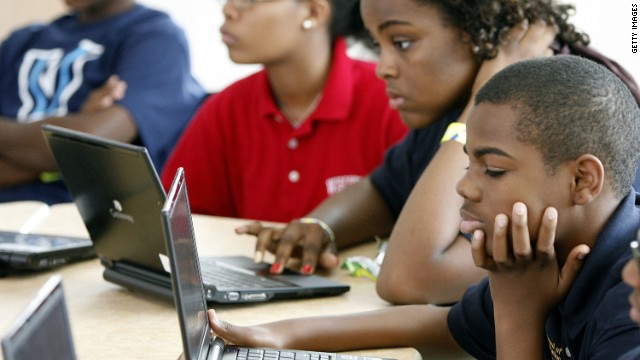 The commitments from Verizon, Sprint and other major companies come in the form of services and devices, including $100 million worth of iPads and laptop computers from Apple Inc., the California-based tech giant.

The Obama administration solicited and secured the corporations’ participation as part of an initiative to extend high-speed Internet access to the vast majority of public schools, with the major push coming in the week before last month’s State of the Union address, according to tech CEOs, who added the effort was led by Gene Sperling, the director of Obama’s National Economic Council, and his Education Secretary Arne Duncan.

Obama, speaking Tuesday at a Maryland middle school, said that in an age of near-ubiquitous wireless coverage at places like Starbucks, it’s more than reasonable to expect the same service in educational facilities.

“In a country where we expect free wifi with our coffee, we should definitely demand it in our schools,” he said, noting that in South Korea high speed internet is available in every classroom. Only 30% of U.S. classrooms have the same capacity.

“We don't want to give away those advantages,” the President said.

Obama himself got a tutorial on using an iPad during a tour of a classroom at the middle school, where students were using a program that taught math using NASA’s Mars rover.

"Good thing about this is you don't have to lug so much around,” Obama said of the Apple products, noting his own daughters were still lugging around heavy books.

Many schools have the same Internet capabilities as homes but with hundreds of students and teachers all trying to log on. In some cases, the demand is too high, causing slower speeds and reduced capabilities for using the Internet in classrooms.

The Federal Communications Commission is also announcing a doubling of funds directed toward providing high-speed Internet access in schools. The billion-dollar increase, which brings the total FCC funds put toward the effort at $2 billion, comes from an unutilized portion of money brought in by the board’s E-Rate program, which is derived from charges on Americans’ wireless and phone bills.

The White House said no new charges were being added to fund the high-speed Internet program.

During his State of the Union address, Obama lauded the step as a “down payment” on advancing education in 15,000 schools that could be wired under his plan. He said 20 million students would benefit from the technology “without adding a dime to the deficit.”

On Tuesday he characterized the announcement as another step in his push to advance his agenda without going through Congress. He spent much of last week making announcements on the minimum wage, retirement accounts and education that similarly required no action from lawmakers.

But he said he would still call on Congress to provide more funding for training teachers to use new technology.

“We still have more work to do to reach more kids and reach them faster, and some of the ideas that I've presented will require Congress to act. But while Congress decides what it's going to do…I will act on my own wherever I have the opportunity to expand opportunity for more young people,” he said.