Agency spokesman Steve Coleman told CNN on Wednesday that the position of director of Interstate Capital Projects had been eliminated.

END_OF_DOCUMENT_TOKEN_TO_BE_REPLACED

(CNN) – Charlie Crist, the Republican-turned-Democrat who is running for governor in Florida, echoed former Gov. Jeb Bush in describing what he characterizes as an extremist turn in the GOP.

"I think I'll quote Jeb Bush. He said it better than I ever could. Today's Republican Party, at least the leadership, is perceived as being anti-women, anti-minority, anti-immigrant, anti-education, anti-gay couples, anti-environment," Crist said Wednesday on CNN's "Piers Morgan Live."

END_OF_DOCUMENT_TOKEN_TO_BE_REPLACED

Washington (CNN) – Republican Sen. Rand Paul of Kentucky told a crowd of social conservatives Wednesday that fighting within the GOP is for the best.

Although Paul pointed out that the debate should not be “impolite” or “rude,” his comments go against what certain Republicans in office have said in the past: That party fighting and vocal disagreement only help Democrats and President Barack Obama.

END_OF_DOCUMENT_TOKEN_TO_BE_REPLACED

(CNN) - President Barack Obama assured Democrats that maintaining control of the Senate is his top priority this year, according to sources present at a meeting between the President and Senate Democrats on Wednesday.

Continuing outreach to members of his party ahead of this year's midterm elections, Obama, along with former President Bill Clinton, attended the Senate Democrats' issues conference at the Washington National's Park.

END_OF_DOCUMENT_TOKEN_TO_BE_REPLACED

(CNN) – Mitt Romney stressed he is not going to run for president in 2016, despite recent speculation that there could be support for a third Romney run.

"The answer is no, I'm not running for president in 2016. It's time for someone else to take that responsibility and I'll be supporting our nominee," Romney said on CNN's "The Situation Room with Wolf Blitzer."
END_OF_DOCUMENT_TOKEN_TO_BE_REPLACED

END_OF_DOCUMENT_TOKEN_TO_BE_REPLACED

BREAKING … SOCHI SECURITY ALERT: U.S. warns airlines flying into Russia that terrorists may try to hide explosives in toothpaste or cosmetics tubes. A law enforcement source said the warning is based on new information and added that there is no known threat to the United States.
The warning comes two days before the Winter Olympics open in Sochi.

REP. KING: I WOULD NOT GO TO SOCHI … Rep. Peter King (R-New York), a member of the House Committee on Homeland Security, tells Wolf Blitzer on CNN’s Situation Room that he would not attend the Olympic games as a spectator. “I would say that they are reasonably safe, but I would not go myself. If I’m an athlete, that's one thing. But just as a spectator, I don't think it's worth the risk. Odds are nothing is going to happen, but the odds are higher than any other Olympics I believe that something could happen.”
END_OF_DOCUMENT_TOKEN_TO_BE_REPLACED

Romney: I would go to the Olympics and take family

(CNN) – Former GOP presidential nominee Mitt Romney, who ran the 2002 Winter Olympic Games in Salt Lake City, said Wednesday he would feel secure enough in traveling to Sochi if his calendar allowed it.

"For those of us who love the Olympics and love the experience and want to see the athletes compete, it's something I would feel safe in doing, I'd take my family to do," the former Massachusetts governor said on CNN's "The Situation Room with Wolf Blitzer."

END_OF_DOCUMENT_TOKEN_TO_BE_REPLACED

But that doesn't seem to be fazing the congressman, Rep. Pete Sessions.

END_OF_DOCUMENT_TOKEN_TO_BE_REPLACED 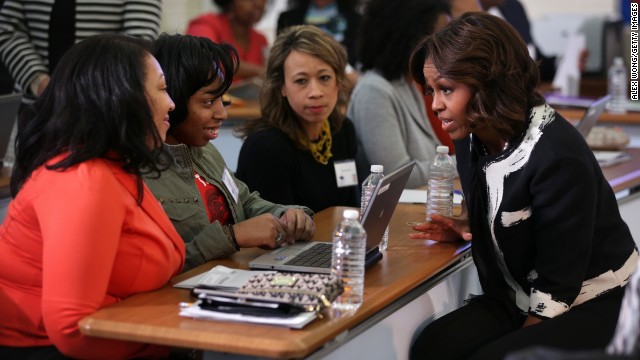 Washington (CNN) - For students wondering how they’ll pay for college, First Lady Michelle Obama has a bit of advice: applying for federal student aid is easy and worth it.

“That’s my message for you and for students across the country. Fill out those forms,” Mrs. Obama said. “Don’t leave money on the table.”