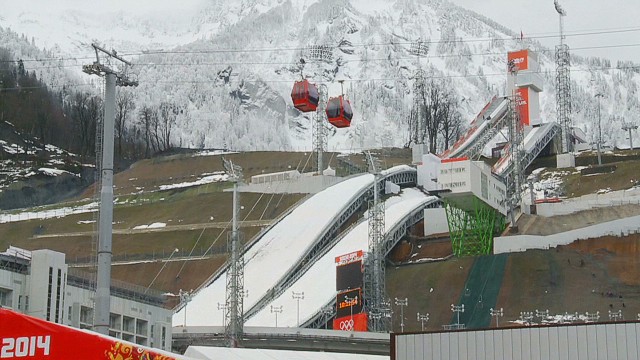 (CNN) - Nearly six in 10 Americans think a terrorist attack will likely happen in Sochi during the Winter Olympics, according to a new CNN/ORC International poll released Wednesday, two days before the opening ceremony.

Islamist militants have warned of attacks as Russia makes final preparations for the sporting events in the South Russia region.

Matthew Glen Olsen, director of the National Counterterrorism Center, told a congressional hearing on Tuesday that authorities are tracking “a number of specific threats” of varying degree.

After a twin suicide bombing in the city of Volgograd – formerly Leningrad - in December, Russian security forces have cracked down on suspected militants in the North Caucasus republic of Dagestan and elsewhere in recent weeks.

But 57% of Americans still believe an attack is likely, compared to 41% who think it's unlikely.

Terrorist threats have long been a concern at the Olympics.

In 1996, shortly before the Summer Olympic Games in Atlanta, 51% believed there would be an act of terrorism, a forecast which unfortunately proved to be accurate. A bomb blast at Atlanta’s Centennial Olympic park killed two people and injured more than 100.

Americans also have a negative perception of Russia as a whole, according to the survey. Fifty-five percent have an unfavorable opinion of the country, up from 40% in 2011.

Russian President Vladimir Putin also polls low among Americans. Twenty percent have a favorable opinion of him compared to 54% who have an unfavorable opinion. Thirty-six percent say they are unsure.

"There are probably plenty of reasons to dislike Russia, but one drag on the country's image in the U.S. is the Russian law concerning public comments in favor of gays and lesbians," said CNN Polling Director Keating Holland. "That law is wildly unpopular in the U.S."

Passed last summer, the "gay propaganda" law makes it illegal to tell children about gay equality. It has been criticized not only by LGBT advocates but also by Western leaders, who have called it archaic and discriminatory.

According to the new survey, only 13% of Americans think the U.S. should have a similar law, with 86% opposing it.

CNN's Ashley Killough and Greg Botelho contributed to this report.