Why do Republicans oppose unemployment benefits?

Washington (CNN) - Republicans have once again blocked an extension of benefits intended to aid the long-term unemployed.

Thursday's vote in the Senate was third time Democrats have attempted unsuccessfully to pass legislation intended to help some 1.7 million people who have had their benefits cut off since the recession-era program expired on December 28.

(CNN) – New York's LaGuardia airport is notorious for crowded terminals and other constraints that contribute to horrid flight delays. And Vice President Joe Biden doesn't appear to be a big fan.

END_OF_DOCUMENT_TOKEN_TO_BE_REPLACED

BREAKING … FEINSTEIN TELLS AMERICANS IN SOCHI TO “WATCH THEIR BACKS” Sen. Dianne Feinstein, D-California, chair of the Senate Intelligence Committee, tells CNN’s Jake Tapper that the security threat stream around the Sochi Olympics “is credible, I think it's real.”
Feinstein noted at least one terrorist group – the Caucasus Emirate – has made threats and "is conceivably capable of carrying out an attack."
"People going to the Olympics should be careful, I think they should watch their backs, I think they should stay out of crowds if they can," said Feinstein. Watch the video from the Lead with Jake Tapper here: CNN.com/thelead

(CNN) - A warning this election season: If you are searching the Web for information on Democratic congressional candidates, read the fine print.

At least 15 websites that appear to be official campaign sites for Democratic candidates, are actually the handiwork of the National Republican Congressional Committee.

END_OF_DOCUMENT_TOKEN_TO_BE_REPLACED

Washington (CNN) - Americans overwhelmingly favor a bill that would give most undocumented immigrants a pathway towards citizenship, according to a new national poll.

And a CNN/ORC International survey also indicates that a majority of the public says that the government's main focus should be legalizing the status of the undocumented rather than border security.
END_OF_DOCUMENT_TOKEN_TO_BE_REPLACED

(CNN) - U.S. Rep. Cathy McMorris Rodgers, a rising political star who gave the Republican response to the State of the Union address last week, is under investigation by the House Ethics Committee for allegations she improperly mixed campaign money and official office funds to finance a bid for a party leadership post.

END_OF_DOCUMENT_TOKEN_TO_BE_REPLACED

CNN Poll: Is Bush still to blame for economy?

Washington (CNN) - Although nearly two-thirds of Americans still give the nation's economy a thumbs down, the percentage who rate the current economic conditions as good now stands at its highest level in six years, according to a new national poll.

And when it comes to the economic blame game, a CNN/ORC International survey released Thursday also indicates that the percentage of people who still blame former President George W. Bush and the Republicans more than President Barack Obama and the Democrats for the country's economic problems is dropping.

END_OF_DOCUMENT_TOKEN_TO_BE_REPLACED 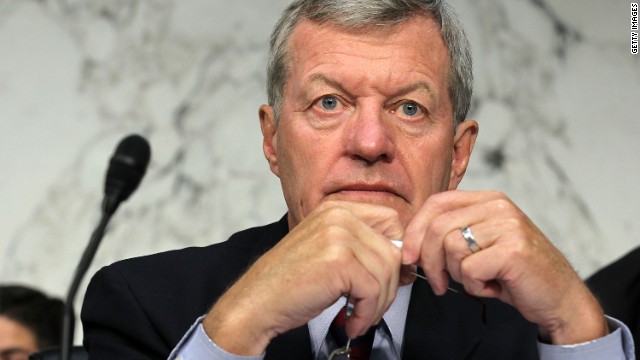 (CNN) – Sen. Max Baucus was confirmed unanimously Thursday by his Senate colleagues to be U.S. ambassador to China.

The Montana Democrat, who currently chairs the Senate Finance Committee, was tapped by President Barack Obama for the high-profile diplomatic post after announcing he would leave the Senate after serving six terms – nearly 36 years.
END_OF_DOCUMENT_TOKEN_TO_BE_REPLACED

Iowa candidate: Koch backing 'like being endorsed by Charles Manson'

(CNN) - Elections in Coralville, Iowa, a town of about 20,000, took a big city turn when the billionaire Koch brother's group, Americans for Prosperity, jumped into last year's mayoral and city council race.

"It was kind of like being endorsed by Charles Manson," is how Chris Turner, a fiscally conservative city council candidate, described the support by AFP to "The Daily Show's" Jason Jones.

END_OF_DOCUMENT_TOKEN_TO_BE_REPLACED

Washington (CNN) - A Democratic proposal to continue long term unemployment benefits failed Thursday to get the 60 votes needed to clear a procedural hurdle in the Senate despite support from some Republicans.

It was defeated 58 to 40. Four Republicans voted with Democrats in favor of the measure that would have extended for three months benefits that expired in December.
END_OF_DOCUMENT_TOKEN_TO_BE_REPLACED