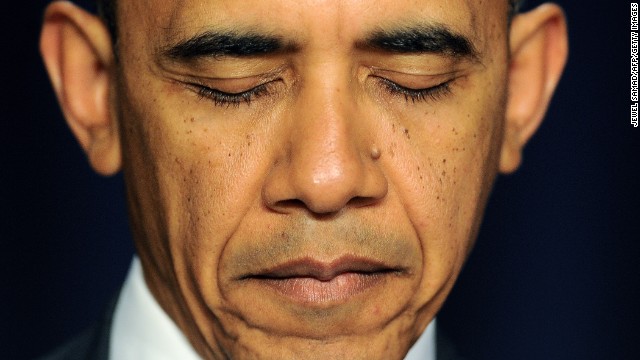 Washington (CNN) - President Barack Obama says that "around the world, freedom of religion is under threat."

"I'm especially looking forward to returning to the Vatican next month to meet his holiness, Pope Francis, whose message about caring for the least of these I hope all of us heed. Like (the Apostle) Matthew he has answered the call of Jesus, who said 'follow me' and he inspires us with his words and deeds, his humility and his mercy and his missionary impulses to serve the cause of social justice," Obama said.

The President touted the Pope's stance on inequality as he and congressional Democrats highlight the issue of income inequality. Obama met Francis' predecessor, Benedict XVI, in 2009. That meeting, which took place at the Vatican, was Obama's only meeting with a Pope.

Much of Obama's remarks focused on threats to religious freedom abroad, from China to Egypt to Sudan and Burma.

"We see governments engaging in discrimination and violence against the faithful. We sometimes see religion twisted in attempt to justify hatred, persecution against other people just because of who they are and how they pray or who they love," said the President at the breakfast, which was held at the Washington Hilton hotel.

The President also called for the release of Americans imprisoned abroad for what many believe are religious issues: Kenneth Bae, who has been sentenced to 15 months of hard labor in North Korea, and Saeed Abedini, a Christian pastor who has been detained in Iran since 2012.

"I hope that somehow they hear our prayers for them," Obama said.

Obama did not address religious freedom in the United States, which some conservative groups say is under threat because of the controversial contraception mandate in the new health care law. Dozens of lawsuits, including two that have reached the Supreme Court, have been filed against the mandate on religious freedom grounds.

Presidents traditionally address the audience at the annual prayer breakfast, a six-decade-old event that brings together leaders of all faiths and political persuasions.