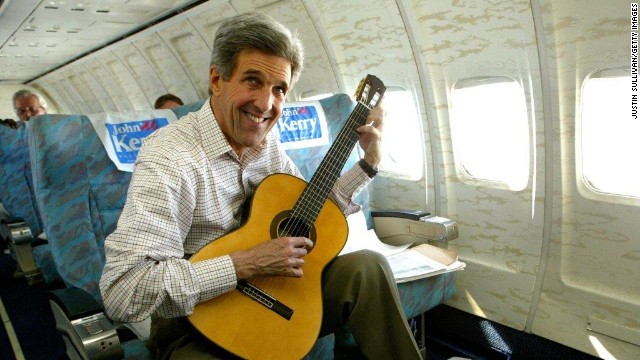 Political Circus: Kerry's a soul man. Clinton lights up the Web. And Biden is...

Washington (CNN) - Deep down inside-and we mean way down, like behind his spleen-Secretary of State John Kerry has blue eyed soul. Really.

Back during his prep school days he laid down tracks for The Electras.

Later, the war hero-turned politician took his axe on the road during his 2004 quest for the presidency. He’s even shredded with Moby—though the Swiss cheesesteak scarfing Kerry probably didn’t break bread between sets with the tofu-loving electronic music guru.

It's little wonder Kerry waxed nostalgic with Haitian President Michel Martelly when the two met earlier this week. Martelly was known by the nickname "Sweet Micky" back when he played Haitian Kompa tunes.

Now that Kerry says "I'm out of politics" and has "no plans whatsoever." Maybe he'll form an ex-politicos band.

He could jam with fellow guitarist and former presidential hopeful Mike Huckabee. He could recruit former British Prime Minister and “Ugly Rumors” lead singer Tony Blair to do the vocals. Former President Bill Clinton could wail on the sax. Former GOP veep candidate and Alaska Gov. Sarah Palin could chime in on the flute like she did back when she was a beauty pageant contestant for Miss Alaska. And former Secretary of State and classically trained pianist, Condoleezza Rice, could tickle the ivories.

It's all about the brand names, baby.

We'll leave it to you to decide what to read into the fact that not one senator mentioned that they actually shop at Target. Slow blink.

Speaking of slow blinks and congressional hearings, Rep. Steve Cohen, D-Tennessee, offered a bit of circumspection about drugs and alcohol during a House hearing on Obama’s pot policies. The level of discomfort after Cohen drops his wisdom is thicker than the smell of weed wafting on the night air on Beale Street.

So Vice President Joe Biden is back in the Circus this week, this time for his quip about LaGuardia airport in New York being akin to something in “the third world.”

Oh, where to unpack the level offense with this one.

There’s the culturally outdated reference to other parts of the world. Check.

There’s a dig at Queens. Check.

The most “interesting” woman in the world.

There was buzz in political circles this week about what a hypothetical Biden vs. Hillary Clinton matchup might look like.

Pop some popcorn. Two of the most memed names in politics.We wanna see the political fight.

Her Tweets had their own Tumblr.

She’s a planetary body with her own gravitational pull.

She is the most “interesting” woman in the world. Stay politically engaged, my friends.