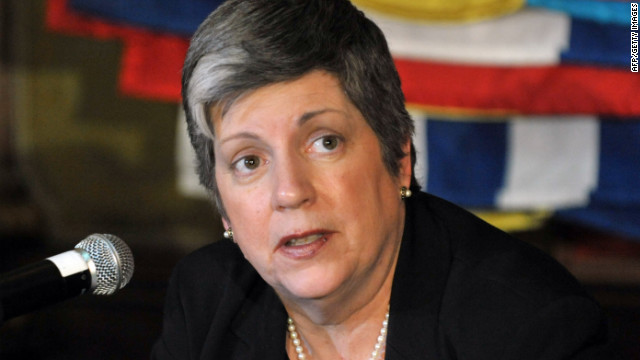 "I think the President chose delegations that represent leaders from various walks of life, former Olympians, leaders in government service," said Napolitano, who's leading the U.S. delegation in the current Winter Olympic Games and served as secretary of Homeland Security from 2009 to 2013.

Obama and Putin have had what’s been described as a chilly relationship in recent years over a number of political differences. But Napolitano insisted Obama simply wanted to send a "delegation that represents the broad values of the United States."

The president, in an interview Friday with NBC's Bob Costas before the opening ceremony, said he wouldn't necessarily call his relations with Putin "icy."

"He does have a public style where he likes to sit back and look a little bored during the course of joint interviews. I think that’s where some of these perceptions come up," Obama said. "My sense is that’s part of his shtick back home politically, as wanting to look like the tough guy. U.S. politicians have a different style. We tend to smile once in a while."

Napolitano told CNN's chief political correspondent Candy Crowley she has no plans to meet or talk to Putin.

"I am not here as a diplomat," she said.

Napolitano added she hasn't seen any security concerns that give her pause in Sochi, though she acknowledged the risk of having the games there, close to a volatile region in Russia.

Napolitano also said she hasn't seen any signs that Russia's so-called anti-gay propaganda law has had an effect on the athletes or made them feel unwelcome.

"President Obama has been very clear over time about the United States and our position with respect to human values and human rights and freedom of expression and tolerance and diversity," she said. "These are things we hold dear in the United States. And this is an area where we have some disagreements with Russia."

And if Napolitano were in the Olympics, what would be her sport of choice?

"I jokingly told another reporter curling, because I got into curling when I was at the Games in Vancouver four years ago," she said. "But I have to say, when you see the figure skaters and the beauty of their performances, it does make one jealous."