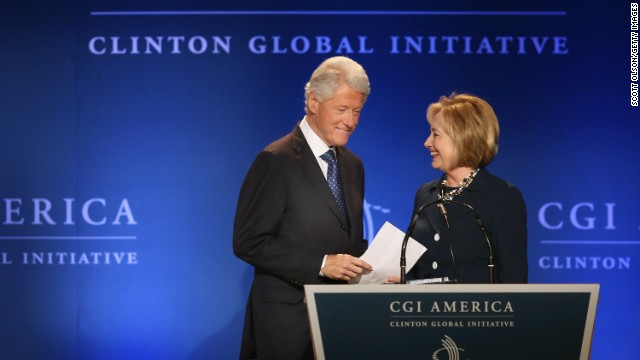 Will Bill Clinton be a help or a hindrance if his wife runs for president again?

(CNN) - A new book set to release this week on Hillary Clinton includes an anecdote about the tension that arose when her husband, former President Bill Clinton, tried to edit one of her speeches.

And former Gen. David Petraeus, a Republican, is quoted in the book as saying Hillary Clinton would be a tremendous president.

They recalled a moment of tension when Bill Clinton tried to add his own style to his wife's speech at the 2008 Democratic National Convention, long after it was clear she would not be the nominee.

"While she had been on the mock stage at the convention center, Bill had delivered edits. He had ripped up the structure and added some of his own poetic flourishes," according to an excerpt from the book, as seen on NBC. "But Hillary was having none of it. Bill and the set of advisers she had hired from his 1996 campaign had proved disastrous at developing her message and strategy for the campaign. She was the one in the host seat now."

Parnes said the story was an example of how the power couple share "the same goal, but they have different strategies of getting there."

"So I think that's going to be an interesting moment to see how this plays out. If Bill Clinton can be the Bill Clinton that he was for Barack Obama in 2012, she's got it made," Parnes said. "If he is the Bill Clinton from 2008, that's a little bit of a precarious situation."

Allen added that while Bill Clinton is talented at political strategy - even for himself - it's a different story when it comes to his wife.

Bill Clinton's place in his wife's potential second run for the White House will certainly be under a microscope. He's already being described as a liability by Sen. Rand Paul, R-Kentucky.

While Paul says he doesn't fault Hillary Clinton for her husband's relationship with Monica Lewinsky, the senator argues that Bill Clinton's sexual past should be considered a factor when Democrats ask him to campaign for them this year, especially at a time when Democrats are trying to paint the GOP as anti-women.

For his part, Petraeus said in the book that Hillary Clinton would make a tremendous president. He did not come down as hard on her as other Republicans have about the deadly attack on a U.S. diplomatic post in Benghazi, Libya, in September 2012.

"Like a lot of great leaders, her most impressive qualities were the most visible during tough times. In the wake of the Benghazi attacks, I thought she was extraordinarily resolute, determined and controlled," Petraeus wrote, according to an excerpt shown on ABC's "This Week."

Parnes, on "Meet the Press," said Petraeus told the authors Hillary Clinton showed a lot of kindness to him when his extramarital affair with his biographer was revealed in 2012, and Petraeus resigned from his post as CIA director.

"She wrote him a note actually and she said, 'I've had a little bit of experience with this,' which we thought was a very interesting moment," Parnes said.