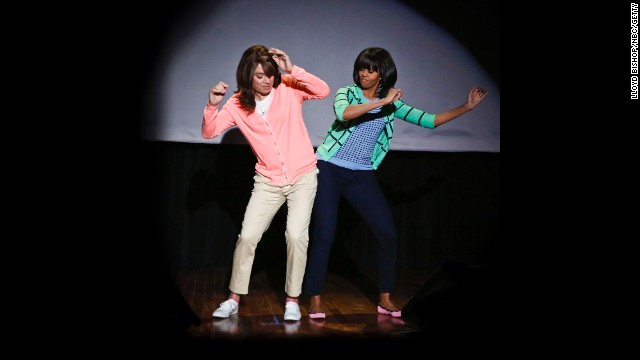 (CNN) - He's got the first lady for his first week.

Jimmy Fallon and Michelle Obama will once again team up when Fallon starts at his new gig as host of NBC's "Tonight Show."

While the program starts Monday, February 17, Obama will appear on the show a few days later on Thursday, February 20, according to a press release.

Actor Will Ferrell will also make an appearance that night, with Arcade Fire as the musical guest.

The first lady was a favorite of Fallon's when he hosted the "The Late Show," which came on after "Tonight" when Jay Leno was the host.

Last year, Obama gave an epic performance called the "Evolution of Mom Dance," consisting of classic moves like the "go shopping, get groceries," the "driving the station wagon" and the "just the hands part of 'Single Ladies.'"

The year before, the first lady invited Fallon to the White House, where she challenged him to a series of fitness exercises – like a sack race across the East Room – to promote her "Let's Move" campaign.

Fallon's first week at the "Tonight Show," which is moving from Burbank, California to New York City, will feature a number of high profile guests, including actor Will Smith and the band U2 on the first night.