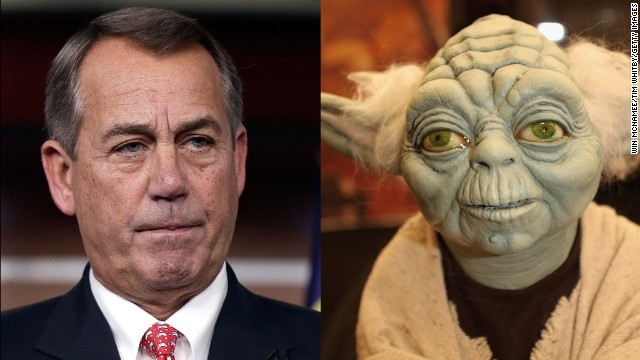 Political Circus: Boehner...A songbird he is

(CNN) – House Speaker John Boehner is kind of like Yoda.

Both have to contend with rebellious youth. For Boehner, it’s the tea party caucus. For Yoda, it was Anakin and Luke Skywalker.

Both always seem to perpetually wear the smiley scowl.

And both are also given to cryptic responses.

He sang it this week after resigning himself to holding a vote on raising the nation's borrowing limit.

Oh, but not nothing, Mr. Speaker. You have a song in your heart.

How we've come to look forward to your warbling of that Disney tune from "Song of the South."

Please, do serenade us.

We get it. He lives in New Jersey. He's a boss. Moving on.

Hail to the Chief

For a moment there, the Commander in Chief channeled the bratty Veruca Salt when, during a tour of Monticello with French President Francois Hollande, President Barack Obama was caught on an open mic joking with a tour guide, "That's the good thing. As a President, I can do whatever I want."

Earlier that day, he used his executive powers to delay enforcement of employer-mandated provisions in the Affordable Care Act. Conservative bloggers were quick to conflate the two unrelated stories.

But yes, Mr. President, you can do whatever you want … so can your opponents.

Oh, Mr. Vice President, you are an endless source of Vine-worthy clips.

This week's verbal gift comes from the Conan show, which picked up on the Veep's confusing response to CNN's Kate Bolduan when asked about his plans for a potential presidential run. The show turned his tongue twisters into its version of his first presidential ad. And it is as silver-tongued as the silver-haired politico himself.

And in the never-ending mission to squeeze as many click-bait worthy pot references into this roundup, here is yet another nod to the ganja leaf.

This week's marijuana mention comes from Republican Florida Sen. Marco Rubio. He demurred when asked at an education forum at Miami-Dade College on Monday whether he ever smoked Mary Jane.

Well, that's it. This week in politics is officially up in smoke.