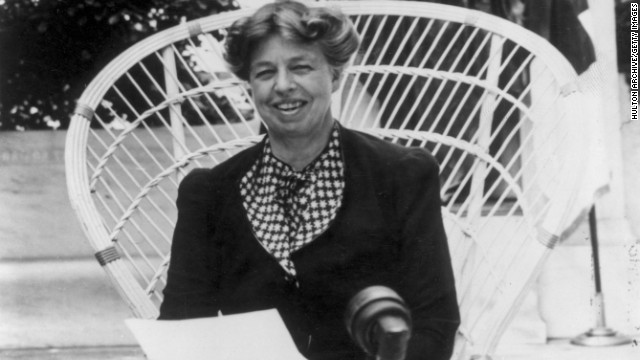 1940: Eleanor Roosevelt making an address at the headquarters of the American Red Cross at Washington DC appealing for donations to a Red Cross War Relief drive.
February 15th, 2014
09:00 AM ET

Survey: The best of the first ladies

(CNN) – The longest-serving first lady also outranks the others who have held the title in integrity, accomplishments and public image.

At least when it comes to a survey of historians and experts on what best epitomizes the characteristics of a first lady: Eleanor Roosevelt is their choice.

Roosevelt’s legacy is followed by Abigail Adams. Jacqueline Kennedy is third, and Dolly Madison is fourth.

The Siena College Research Institute survey ranks first ladies based on 10 categories – from background, public image and integrity; to accomplishments and value to the country.

The study, conducted five times since 1982, adds Michelle Obama to the mix for the first time in fifth place, bumping Hillary Clinton down two spots from fourth to sixth - since the last time the survey was conducted.

“Put Eleanor Roosevelt’s picture next to first lady in any text,” said Dr. Don Levy, Director at the Siena Research Institute. “Not only is she most highly rated overall and in many of categories, but among First Ladies of the 20th-21st centuries she is seen as best on advancing women’s issues, as the strongest communicator, greatest political asset, performing the greatest service to the country after leaving office and as creating a lasting legacy.”

Roosevelt broke precedents in her role as first lady from 1933 to her husband’s death in 1945, holding news conferences, traveling the country and expressing her opinions openly in a daily syndicated newspaper column, according to a White House biography.

Still, the political potential for others has yet to be seen.

Clinton comes out on top for those most capable of running the country – a good spot to hold considering the former secretary of state and Democratic senator is seriously considering a White House bid in 2016.

Mrs. Roosevelt and Mrs. Obama are a distant second and third, respectively, in the presidential material category.

“Clinton is not surprisingly seen as the one first lady most readily capable of moving from the White House quarters into the Oval Office, a feat that may come to pass by the next First Lady Survey,” Levy said. “Michelle Obama finishes third as a potential President and rates strongly on attributes including balancing family life, women’s issues and communicating.”

Scholars and experts rated Laura Bush, wife of former President George W. Bush, as the first lady who could have done more with her time at the White House. Bush is followed by Pat Nixon and Mamie Eisenhower.

According to the study, combined with Siena’s 2008 Rankings of the American Presidents, the capital’s highest ranking power couples were Eleanor and Franklin Roosevelt. The Washingtons came in second followed by Edith and T.R. Roosevelt.

Mary Lincoln proved to be the greatest drag on her husband’s legacy. Abe Lincoln is ranked as third in Siena’s 2008 study of presidents, but his wife’s ranking pulls the couple down to seventh in the latest survey.