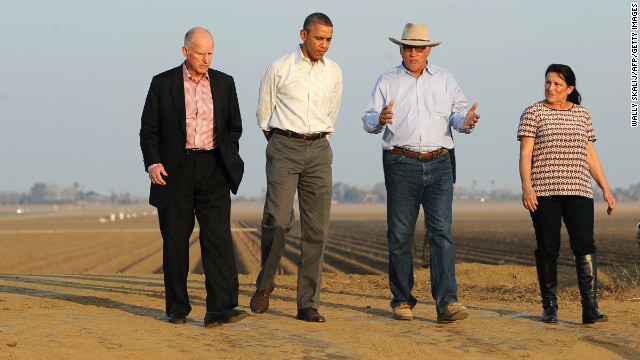 (CNN) - Following President Barack Obama’s announcement of $1 billion in new funding to help prepare for the effects of climate change, Secretary of State John Kerry promised his own actions as part of the administration's push in a keynote speech in Indonesia, warning that climate change will also threaten the world economy.

But the consensus is still split on the merits of climate change among lawmakers.

In a speech in Jakarta, Kerry said climate change could be ranked among terrorism and the proliferation of weapon of mass destruction as top global threats, knocking skeptics as “shoddy scientists and extreme ideologues.”

"When I think about the array of global climate – of global threats – think about this: terrorism, epidemics, poverty, the proliferation of weapons of mass destruction – all challenges that know no borders – the reality is that climate change ranks right up there with every single one of them," he said.

The plea for international action by Kerry, who also said he would this week instruct all U.S. embassies to make climate change a top priority, comes after Obama's renewed his push in his State of the Union address for action on the issue. Obama announced on Friday he will propose as part of his 2015 budget a "climate resilience fund" and data collection initiatives to determine the effects and preparation needed for climate change.

“The budget that I send to Congress next month will include $1 billion in new funding for new technologies to help communities prepare for a changing climate, set up incentives to build smarter, more resilient infrastructure," Obama said Friday in California speaking to farmers in Fresno, California who have been severely affected by a drought in the state.

As over 90% of California is experiencing severe or exceptional drought, Los Angeles Mayor Eric Garcetti said legislators don't have the time to debate the issue.

"This was the driest year on record, but you know, it's coming at an immense cost whether it's wildfires, whether it's changing how we get water," he said on ABC's "This Week." "Governors and mayors, you know, we don't have the luxury of debating the issue. I think it's clear human beings have had an impact in creating the problem and we have to solve it now."

Republican Gov. Pat McCrory of North Carolina, whose state was hit hard as another winter storm hit the mid-Atlantic last week, said climate change is real but was dubious on humans' impact.

"I believe there is climate change, I'm not sure you can call it climate warming anymore especially in the Carolinas. I think the big debate is how much of it is manmade and how much of it will just naturally happen as earth evolves," he said on ABC.

Rep. Marsha Blackburn, a Republican from Tennessee who serves as vice chair of the House Energy and Commerce Committee, said Sunday, that there's yet to a be agreement on that driving force of climate change.

"What we have to look at is the fact that you don't make good laws, sustainable laws, when you're making them on hypothesis, or theories, or unproven sciences," she said Sunday on NBC's "Meet the Press."

"It is a way apparently that the fossil fuel industry has dealt with our politics. And this is not good," Nye said, appearing with Blackburn on NBC. "You don't need a p.H.D. in climate science to understand what's going on, that thing that we have overwhelming evidence that climate is changing. That you cannot tie any one event to that is not the same as doubt about the whole thing."

A report issues last year by a United Nations climate panel said scientists are 95% certain that humans are main cause of global warming since the mid-twentieth century.

The latest U.N. report, due to be released in March and obtained by CNN, said if there aren't explicit efforts to reduce greenhouse gas emissions, the drivers of emissions growth are projected to continue, regardless of improvements in energy supply and technology.