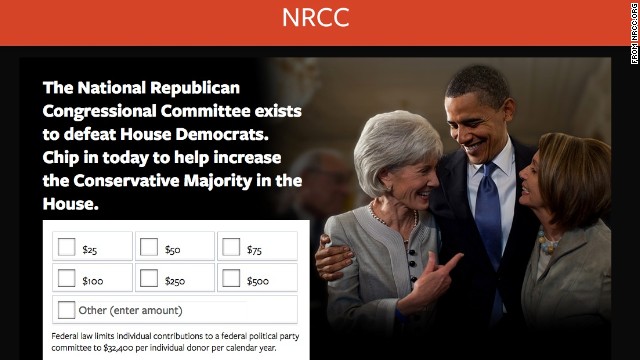 Washington (CNN) – The National Republican group whose mission is to elect GOP House members has altered some of its misleading websites for 2014 congressional candidates, making it more clear that any contributions made through the sites will be going toward defeating Democrats, not supporting them.

The website changes come after Griffin interviewed one donor who thought he was contributing to Democratic Rep. John Barrow when he clicked a big, blue “donate” button on a site that looked like it was made by the Georgia congressman’s campaign. The URL read: johnbarrow2014.com.

Randy Frails, the donor, contributed $1,000 through the website, only to soon realize it was actually a site created to challenge Barrow. He didn’t see the smaller print that stated the money would go toward defeating the Democratic incumbent or the tiny disclosure at the bottom that the website was paid for by the NRCC.

Frails was able to get his money back, but the John Barrow website is one of many that uses the image of the candidate in a positive light, not the kind of image seen in attack ads. It appears at first glance to be supportive of the candidate.

The copy on the page reads like a negative ad and quickly proves that the website is not affiliated with the candidate: “Georgia families know John Barrow is not fighting for them in Washington.” NRCC spokesman Daniel Scarpinato defended the websites earlier this month, saying the “sites are clear in terms of the disclosure and the content where we're coming from.”

The home page portion of these websites still remains online, including the disclosure, but the contribution page has changed.

“The National Republican Congressional Committee exists to defeat House Democrats. Chip in today to help increase the Conservative Majority in the House,” the page reads.

Here’s an example of the old shot of a contribution page for Democratic candidate Alex Sink in Florida. The donate button now takes donors to the new page.

Scarpinato confirmed Sunday the group had changed the donation portal on the websites.

"We recently updated our contribution pages, as we frequently do, to highlight our efforts to defeat House Democrats in 2014 and prevent Nancy Pelosi from ever being Speaker of the House again,” he said in an e-mail.

A photo of President Barack Obama, House Minority Leader Nancy Pelosi and Health and Human Services Secretary Kathleen Sebelius - who are all smiling - is also displayed at the top of the new contribution page.