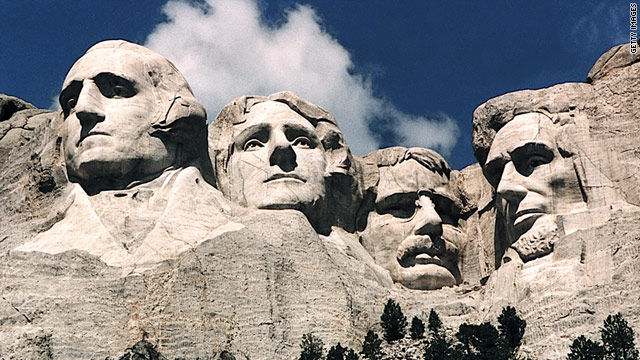 ON PRESIDENTS DAY, OBAMA’S APPROVAL RATINGS REMAIN NEAR THE LOWEST OF HIS PRESIDENCY … According to a CNN Poll of Polls compiled Monday, which averages the most recent non-partisan, live operator national surveys, the President's approval rating stands at 42%, with 53% of Americans giving a thumbs down to Obama's performance in the White House. – Paul Steinhauser

[twitter-follow screen_name='GutCheckCNN']
ON THE TRAIL WITH MITCH & RAND… CNN’s Dana Bash reports: You wouldn’t think it would be noteworthy for two senators from the same state and the same party to share a stage, but it is with Mitch McConnell and Rand Paul, who are spending the day together in eastern Kentucky. Gone are the days when McConnell wanted Paul’s GOP opponent to be his partner in the Senate. To hear McConnell today, it’s almost an all-out bromance.

“I’m pleased to be here with Senator Paul who does a fabulous job representing our state in the US Senate,” McConnell said, one of several notes of praise McConnell sang throughout the day. A McConnell source tells CNN these events were planned last month, but the timing couldn’t be better for McConnell after what happened last week – angering the GOP base by providing a pivotal vote to break a debt ceiling filibuster waged by Sen. Ted Cruz, R-TX.

McConnell-land insists they’re much more focused on his re-election in November, than his GOP primary challenger Matt Bevin, but McConnell is minority leader now largely because other establishment Republicans (Dick Lugar, Mike Castle… the list goes on) didn’t take challenges from the right seriously. He is clearly determined not to make that mistake.

Shoring up his base by appearing with tea party darling Rand Paul is shrewd politics for McConnell. Take this McConnell comment today as case in point: “The junior senator from Kentucky is a national figure already, deeply involved in the national debate about the direction of this country. I couldn’t be prouder to call him my colleague – Senator Rand Paul”

POLLS: PUBLIC'S IMMIGRATION PRIORITIES CHANGING … A second-straight national poll indicates that may Americans have shifted their priorities when it comes to immigration reform. According to a Gallup survey released Monday, 44% of those surveyed say it's extremely important for the United States to develop a plan to deal with the large number of undocumented immigrants. Forty-three percent say the top priority should be beefing up border security to halt the flow of undocumented workers into the country.

- McCain: I won’t give up on immigration reform -
SEN. JOHN MCCAIN, R-ARIZONA, TO CANDY CROWLEY ON CNN’S STATE OF THE UNION: “I have not given up hope that we will act – and we must act … I won't give up. We have the broadest coalition of support of any legislation I've ever been involved in - big businesses, small businesses, evangelicals, Catholic Church - the list goes on and on. It's time for those people to weigh in and bring pressure to bear and say look, we need to act.”

THE BUZZ: PANDORA PREDICTS POLITICAL PREFERENCE
Wall Street Journal reports: The Oakland, Calif., company plans to roll out a new advertising service next week that would enable candidates and political organizations to target the majority of its 73 million active monthly Pandora listeners based on its sense of their political leanings … How can it do this? The company matches election results with subscribers' musical preferences by ZIP Code. Then, it labels individual users based on their musical tastes and whether those artists are more frequently listened to in Democratic or Republican areas. Users don't divulge their political affiliations when they sign up for Pandora. – Elizabeth Dwoskin

TRAIL TRIVIA
(Answer below)
Each president’s head on Mount Rushmore signifies a milestone in the first 150 years of U.S. history. What are the four milestones?

Leading CNNPolitics: Friend's papers give insight into rise of the Clintons
Sources said Clinton had lots of ideas of who should sit on the high court– too many, in the eyes of many White House staffers. Names included New York Gov. Mario Cuomo, Senate Majority Leader George Mitchell, and Education Secretary Richard Riley. All turned him down. Interior Secretary Bruce Babbitt's name was quietly leaked, but Senate Republicans made clear he would face a rocky confirmation. Clinton even briefly considered naming his wife to the court– which he labeled an intriguing, "sexy" idea– but was quickly talked out of it, according to former top White House aide George Stephanopoulos, in his memoir. – Bill Mears

Leading Dallas Morning News Opinion: Editorial: We recommend John Cornyn in GOP primary for the U.S. Senate
Sen. John Cornyn is a principled lawmaker whose brand of Texas conservatism makes him the best choice in this eight-way GOP primary race for the Senate … Rep. Steve Stockman has run a clownish campaign with the baseless claim that Cornyn supports the Affordable Care Act. – Dallas Morning News Editorial Board

Leading Drudge: Venezuela on the Brink
Venezuelan President Nicolas Maduro called supporters to take to the street tomorrow, hours after an opposition politician sought by police urged his allies to march with him on the same day. Leopoldo Lopez, the leader of opposition party Voluntad Popular who Maduro accuses of inciting violence, urged Venezuelans to dress in white and march with him on Tuesday, daring officials to enforce an arrest order issued against him. Maduro responded by summoning a demonstration of 30,000 to 40,000 oil workers. – Cronia Pons

Leading Politico: Eric Cantor blasts ‘isolationist sentiment’
Make no mistake: Eric Cantor sides with the strong-on-defense wing of the GOP. In a Presidents Day speech prepared for delivery at the Virginia Military Institute, the House majority leader offers a full-throated rebuke of the “isolationist sentiment” he says caused the United States to hesitate to enter World War II and again threatens to unleash global horrors. The speech is aimed at President Barack Obama, accusing him of bungling just about every foreign policy challenge he’s faced as commander-in-chief, from Syria’s civil war to the attempt to reset relations with Russia.

- Romney: Bill Clinton not as relevant as Hillary -
FORMER MASS. GOVERNOR AND VICE PRESIDENTIAL NOMINEE MITT ROMNEY IN AN INTERVIEW WITH NBC’S “MEET THE PRESS” SUNDAY: "I don't think Bill Clinton is as relevant as Hillary Clinton if she decides to run for president … The times when (Bill) was president were by and large positive economic times for the country. On the other hand, he embarrassed the nation. He breached his responsibility, I think, as an adult and as a leader in his relationship. And I think that's very unfortunate, but I don't think that's Hillary Clinton's to explain. She has her own record, her own vision for where she would take the country.”

Gut Check Full Service: According to a new Siena College Research Institute survey, Hillary and Bill Clinton are ranked the 9th most powerful first couple in American history, behind the Obama’s, the Kennedy’s, the Washington’s and more. When it comes to the most powerful first ladies of all time, Hillary Clinton ranks 6th, falling behind Eleanor Roosevelt, Abigail Adams, Jacqueline Kennedy, Dolley Madison and Michelle Obama.

- Mitch McConnell on allowing debt-ceiling vote: ‘I had to do what's best for the country’ -
SENATE MINORITY LEADER MITCH MCCONNELL AT A CAMPAIGN EVENT IN LOUISVILLE ON FRIDAY: "My job is to protect the country when I can and to step up and lead on those occasions when it's required. That's what I did … My first choice would be to pass a debt ceiling that had something related to doing something about the debt on it, but as you know, the House of Representatives couldn't pass anything else other than a clean debt ceiling … We were confronted with a clean debt ceiling in the Senate or default."

- McCain: Cruz had no plan when he shut down the government -
SEN. JOHN MCCAIN, R-ARIZONA, TO CANDY CROWLEY ON CNN’S STATE OF THE UNION: “I understand where Sen. Cruz is coming from. We have a cordial relationship, and I respect his right to do – exercise his rights as the United States senator which he did last week, but I allege that there was no plan. There was no plan once we had taken the United States on the brink of this financial crisis that we were approaching.”

- Chelsea Clinton: Don’t mistake progress with success –
CHELSEA CLINTON IN A KEYNOTE SPEECH AT A HUMAN RIGHTS CAMPAIGN EVENT IN LAS VEGAS SUNDAY: “After all the incredible progress we saw in 2013, I think it’s sometimes easy to think that progress actually marks success and that our work can stop on the steps of the Supreme Court … We made tremendous progress on the legal, political and cultural fronts, but we should not mistake progress for success because we have a lot more work to do.”

- The President on healthcare being called Obamacare: “I like it” –
PRESIDENT BARACK OBAMA IN AN INTERVIEW WITH NBA HALL OF FAMER CHARLES BARKLEY: “I like it … I don't mind. And I tell you, five years from now when everybody's saying, ‘Man, I’m sure glad we got health care,’ there are going to be a whole bunch of people that don't call it ObamaCare because they don't want me to get credit.”

- Obama: Lebron has potential but Jordan has my heart –
PRESIDENT BARACK OBAMA IN AN INTERVIEW WITH NBA HALL OF FAMER CHARLES BARKLEY: “Now, I'm a Chicago guy, and Mike (Michael Jordan) will always be the guy for me, just because that was a magical moment for the city, and he was a champion, but Mike's now retired … LeBron, when you look at him, you might think he might be able to play at a high level for another seven, eight, 10 years. He's only 29 years old. In terms of every aspect of the game, LeBron has the chance to be as good as anybody."

Jay Carney (EOP) (@PressSec)
5 years ago today, President Obama took action to bring our economy back from the brink by signing the Recovery Act into law. #ActOnJobs

Sen. McConnell Press (‏@McConnellPress)
McConnell: "@KYComer, @SenRandPaul & I share a vision of a prosperous eastern KY that helps lead the way for the Bluegrass State" #projectAP

Donna Brazile ‏(@donnabrazile)
Even during Obama’s first term, Mitch McConnell said that thwarting him was their biggest political priority. #PresidentsDay of action.

The Star-Ledger (@starledger)
Since texts tie @kevinjotoole to the #bridgegate coverup, he shouldn't be on the investigating panel: Editorial nj-ne.ws/tI5aI

Maeve Reston (@MaeveReston)
Sunnylands golf course, where the President is playing today, has been host to many presidents: Eisenhower, Nixon, Reagan, and H.W.

According to the National Park Service, Gutzon Borglum, the sculptor and visionary for Mount Rushmore, chose Presidents Washington, Jefferson, Lincoln and Roosevelt to carve on the mountain, because they each represent one particular milestone in the first 150 years of American History.

George Washington, being the nation’s first president, represents the birth of our country. Thomas Jefferson, for being credited with the Louisiana Purchase in 1803 symbolizes the expansion of the nation. Abraham Lincoln embodies the preservation of the nation due to his diligence in confronting the challenges of the Civil War. Theodore Roosevelt represents the development of the United States, for his promotion of the construction of the Panama Canal.