Washington (CNN) - A new television ad urges what the U.S. Supreme Court has been loathing for decades to allow: cameras in its marble-walled courtroom.

Eleven media and public transparency groups released the ad Tuesday in the Washington, D.C. area and some cable television outlets, saying "It's time for a more open judiciary."

END_OF_DOCUMENT_TOKEN_TO_BE_REPLACED

5 reasons why climate change is back in the news

Washington (CNN) - In the space of 48 hours, Secretary of State John Kerry likened climate change to a weapon of mass destruction, Newt Gingrich called Kerry delusional, Sunday talk shows argued about it and President Barack Obama announced another executive action to combat it.

After what seemed like a lull in political focus on the issue, why is everyone talking about it this week?

Toluca, Mexico (CNN) - Midterm election pressures are likely to follow President Barack Obama to Mexico where he’ll meet his North American counterparts on issues that have caused headaches for Democrats, from the Keystone pipeline to immigration reform to trade.

END_OF_DOCUMENT_TOKEN_TO_BE_REPLACED

BREAKING … Kiev burns; 14 dead …Violent showdown looms over presidential power … Long-simmering tensions exploded anew in Ukraine as clashes between police and anti-government protesters left at least 14 people dead and the capital's central square afire throughout Tuesday into predawn Wednesday. The fresh violence in Kiev comes amid monthslong turmoil in what is essentially a fight over whether the country's future is alongside Russia or Europe, the latter favored by protesters.
What you need to know
• John Kerry urges Ukraine government to resume talks with opposition
• U.S. Embassy says Ukraine security "may take extraordinary measures"
• Opposition tells President: "Do not let Ukraine become a country covered with blood"
• McCain tells CNN’s Jake Tapper that President Obama should push for sanctions

END_OF_DOCUMENT_TOKEN_TO_BE_REPLACED

Washington (CNN) – Republicans and Democrats reacted with lightning speed and polarizing conclusions to a new report on the minimum wage released Tuesday.

To the GOP, it is evidence that Democrats' policies would cut jobs; to Democrats, it shows that Republicans' ideas would keep more people in poverty.

END_OF_DOCUMENT_TOKEN_TO_BE_REPLACED

Biden to talk healthcare on 'The View'

(CNN) - Adding a second nationally televised appearance to his schedule, Vice President Joe Biden will stop by "The View" next week, his office said Tuesday.

Biden will discuss the Affordable Care Act with the ladies of the ABC daytime show on February 25, the morning after he appears as the opening guest for Seth Meyers' debut as "Late Night" host.

END_OF_DOCUMENT_TOKEN_TO_BE_REPLACED

Raising minimum wage would ease poverty but cost some jobs

New York (CNNMoney) - Raising the federal minimum wage would boost the incomes of most low-wage workers but result in job loss for some, according to an analysis released Tuesday.

The Congressional Budget Office estimates that gradually raising the minimum wage to $10.10 an hour would reduce total employment by about 500,000 workers, or 0.3% of the workforce.

GOP Sen. Cochran says he doesn't know much about the tea party

(CNN) - While some Republican incumbents with primary challengers are trying to woo conservatives, Sen. Thad Cochran says he's not too familiar with the tea party.

"The tea party is something I don't really know a lot about," the six-term senator from Mississippi told reporters. "It's a free country. We have open opportunities for people to participate in the election process."
END_OF_DOCUMENT_TOKEN_TO_BE_REPLACED

'Jeopardy' winner to retire from Congress

Washington (CNN) - Rep. Rush Holt, an eight-term Democrat from New Jersey, nuclear physicist, and five-time "Jeopardy" winner, announced Tuesday that he'll retire at the end of the year rather than run for re-election in November.

"There is no hidden motive for my decision. As friends who have worked with me know, I have never thought that the primary purpose of my work was re-election and I have never intended to make service in the House my entire career."

END_OF_DOCUMENT_TOKEN_TO_BE_REPLACED 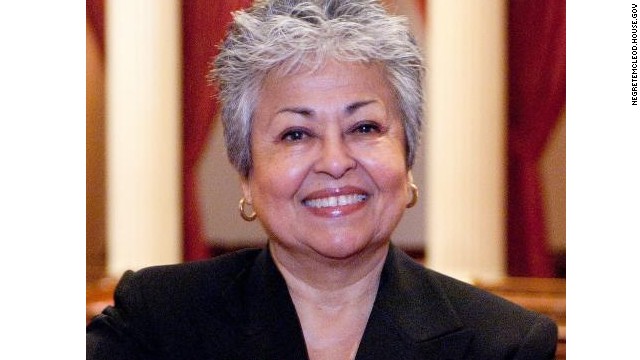 Democratic congresswoman to retire after one term

Washington (CNN) – Two years is enough for Democratic Rep. Gloria Negrete McLeod, who announced Tuesday that she will retire from her California congressional seat at the end of her first term in office.

McLeod – who was sworn in just over a year ago in January 2013 – said she will instead run for San Bernardino County supervisor.