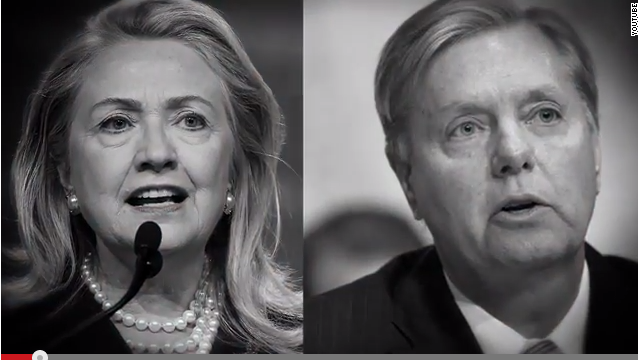 Columbia, South Carolina (CNN) - Each one of Lindsey Graham's five underfunded Republican primary opponents have been struggling to gain traction in the race and emerge as the South Carolina senator's leading conservative opponent.

Not one of them, though, has managed to break out of the pack.

Now one candidate is hoping to use former Secretary of State Hillary Clinton as a weapon.

Who can beat Lindsey Graham?

The 30-second spot uses footage from a 2012 speech in which Graham called Clinton "a role model" and one of the "greatest ambassadors for the American people that I've known in my lifetime."

The low-budget ad concludes with footage of Graham hugging Clinton. The Connor campaign says the ad will run statewide on Fox News channel for two weeks.

The size of the Connor ad buy is meager, according to one Republican tracking TV spending in the state, so it's unclear how many Republican voters will actually see the commercial.

But it's the first time one of Graham's opponents has tried to make hay out of his gracious attitude toward Clinton - and it's another signal that Clinton's standing among Republicans has diminished since she left the State Department a year ago and inched her way back into the political spotlight.

South Carolina's GOP primary is June 10. If no candidate wins more than 50% of the vote, the race moves to a two-week runoff between the top two finishers.