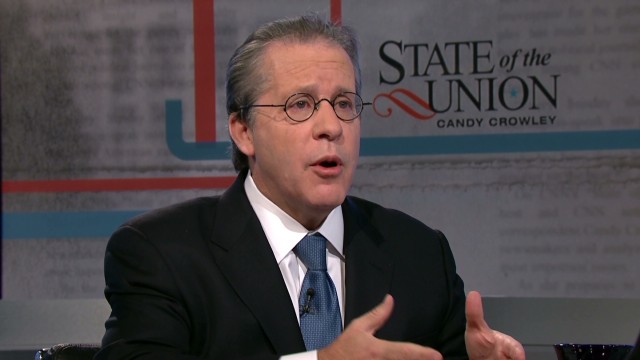 Washington (CNN) - While warning there is much more to be done to get to a healthy economy, National Economic Council Director Gene Sperling said, "I would still be cautiously optimistic that the general notion is that there are positive trends in the economy."

Sperling said that he believes data that has been coming out about the economy weakening, including slow housing starts, will probably turn out to be weather related. But he did concede that while the economy is on the right track it is, "not good enough," adding that the country "needs stronger growth."

[twitter-follow screen_name='politicalticker']
Sperling was a guest Thursday at morning breakfast hosted by Politico. He tackled the budget rollout next month saying the deal would include, "a mix of future mandatory savings and future revenues that could be used to deal with the long term situation but would put less of a drag on the economy now."

He added that President Barack Obama, "has shown he is willing to compromise to achieve that."

He would not say whether that meant the plan would call for tax hikes. He also warned that he has learned that in Washington, until a deal is signed, there are lots of things that can go wrong.

On raising the national minimum wage to $10,10 an hour, Sperling challenged the Congressional Budget Office's assertions that the President's proposal could cost 500,000 low wage workers their jobs.  He cited several studies that looked at neighboring states where one state raised the minimum wage and the other did not. He says the studies conclusively showed that jobs were not lost on either side of the border, and that companies found that the long term benefits of raising wages far outweighed the initial costs.

He said it helped them with greater retention of employees, less absenteeism and not having to pay to hire and train new employees. Sperling said the President's proposal would give raises to 16.5 million workers directly. He pointed to some large corporations which have heeded Obama's call to take unilateral action and already raised or are in the midst of raising their lowest wages to at least $10 an hour, like the Gap and Costco.

Meanwhile Sperling's on again- off again departure from government service is definitely on again. He says he knows his credibility has been "slightly weakened."

But he now says: "March fifth - that is likely the last day," adding, "This time I think it's for real."

He says his exit has been delayed several times because of the President's State of the Union address, and completing the budget deal. Asked whether he would come back to Washington if Hillary Clinton were to move into the White House, he says, "Right now I'm more focused on what my flight to L.A. will be after I leave, than what's gonna happen in the next few years."

But he did leave the door open, saying "Obviously I would always be loyal to President Clinton and Hillary Clinton, but boy that's a long way off."

Sperling has served in his current role at the National Economic Council under both President Obama and previously under President Bill Clinton in the late 1990s.