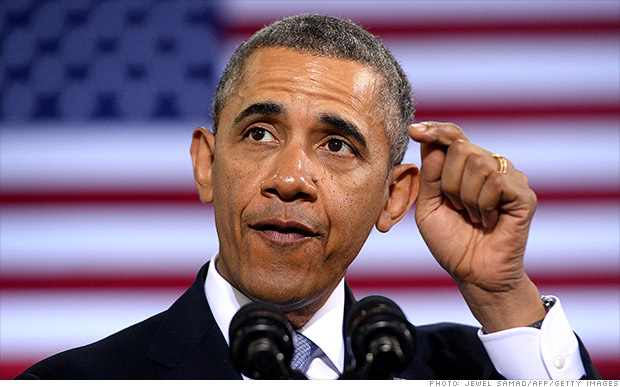 Washington (CNN) – It's got a bookish sounding name - "chained CPI." The President's decision to drop the financial measure from his upcoming budget, after including it in his proposal last year, sparked sharp political reaction here Thursday.

Why is that such a big deal?

1. The worker and retirement fight

Democrats and their allies applauded the President's election-year decision as something that would help labor.

"This is great!" a clearly happy Jessica Klement told CNN not long after the White House announcement.

Klement is the spokeswoman for the National Active and Retired Federal Employees Association, or NARFE, which has battled against the chained CPI push for years.

The term refers to an alternate measure of inflation, one that some say is more accurate, but which is usually lower than the current figure. By switching to the chained CPI, the federal government could save hundreds of billions of dollars.

But groups like NARFE oppose it because it would lower payments to Social Security beneficiaries and cut pension checks to federal retirees.

"It's definitely a benefit cut," Klement said of the idea.

So the president's move away from the measure was a victory on two pieces of sensitive Democratic territory: workers' benefits and Social Security.

"I commend the President for his commitment to keeping Social Security strong," wrote Senate Leader Harry Reid's office on Twitter. "And for rejecting GOP calls to cut badly-needed increases."

But as Democrats cheered, Republicans cried foul. To them, Obama just backed away from one of the few serious proposals he put on the table to address the coming financial storm from entitlements.

"This reaffirms what has become all too apparent: the president has no interest in doing anything, even modest, to address our looming debt crisis," said Brendan Buck, spokesman for House Speaker John Boehner, in a statement.

Republicans generally like the chained CPI because it would tighten up entitlement spending and not raise taxes. When the president opened the door to making the change, it became a matter of negotiating trust between the White House and Republicans.

Obama has pointed to his willingness to approve the measure as proof that he would make some political sacrifices as part of larger budget talks.

Taking the measure out of his budget this year, sparked a Republican backlash and cries that President Obama is not serious about compromising over entitlements.

3. The fight over President Obama

Running under all of this are questions from both the right and the left about where exactly Obama stands in the debates over workers and the deficit.

"It's not like (chained CPI) is something that's now off the table," said NARFE's Klement. "It's just not in his budget this year."

This speaks to Obama's nuanced approach to the measure. He has consistently said he would support chained CPI only as part of a multi-trillion-dollar deal with Republicans, not as part of a one-year or small-ball plan.

That nuanced approach – I will do X, but only as part of a very specific Y – has negatively affected how both the left and the right see this president. The left fears he is willing to bargain away a priority. The right sees him as an insincere negotiator.

The White House insists the President's position is consistent, that he will make tough compromises - but only if Republicans do as well.

But compromises, with or without the chained CPI, are unlikely in this year when most of Congress is up for re-election.