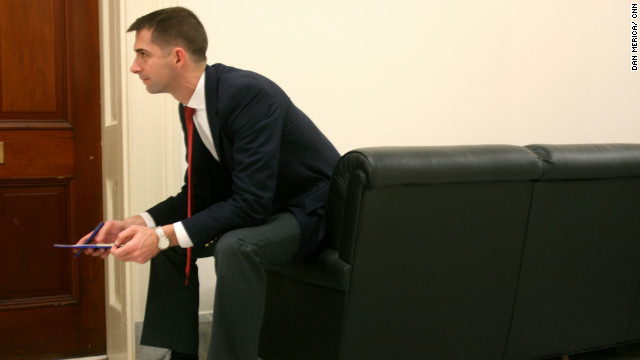 Washington (CNN) - If there were any doubts left that running against Obamacare is the GOP's strategy in 2014, the President's signature healthcare law was again the message of the GOP's weekly address.

In a message released Saturday, Rep. Tom Cotton, R-Arkansas, slammed the administration for "the sad reality of Obamacare: lose your insurance, lose your doctor, lose your job."

[twitter-follow screen_name='politicalticker']
Cotton is running for Senate, trying to unseat Sen. Mark Pryor, a vulnerable Democrat in a state that leans right. That race is one of a handful across the country where incumbent Democrats face tight re-elections - and where Republicans hope to pick up enough seats to win control of the Senate.

There, and elsewhere, Democrats have shied away from the President and, in some cases, even gone after his healthcare law.

Instead of attacking his opponent, though, Cotton set his sights on the President.

"Arkansans, like most Americans, have had their grit tested over the last several years through a financial collapse, recession, and a stagnant, jobless recovery. Barack Obama's policies aren't solving these problems; they're causing the problem," he said.

Five million Americans have lost their healthcare policies under Obamacare, and the Congressional Budget Office projects the law will cost 2.5 million full-time jobs, he said.

Obamacare could reduce the labor force by the equivalent of 2.5 million workers in 2024 as many workers opt to work less to retain their eligibility for Medicaid or new federal subsidies under the healthcare law, according to that report.

Obamacare also will leave 31 million Americans uninsured by 2023, says Cotton, citing another CBO report. Other CBO estimates, however, say that number is actually a decrease from the 57 million that would be uninsured without the insurance exchanges and Medicaid expansion the law creates.

"The impact of these policies is real, and I've met people across the state with stories that show how misguided Obamacare is," he said, referencing a constituent named Elizabeth whose premiums have risen 85% because of the law's new coverage mandates.

"Republicans in Congress are committed to stopping the harms caused by the President's policies, repairing the damage, and getting America working again. We're advocating reforms that trust patients and their doctors – not Washington bureaucrats. And we're working to get spending under control," he said.