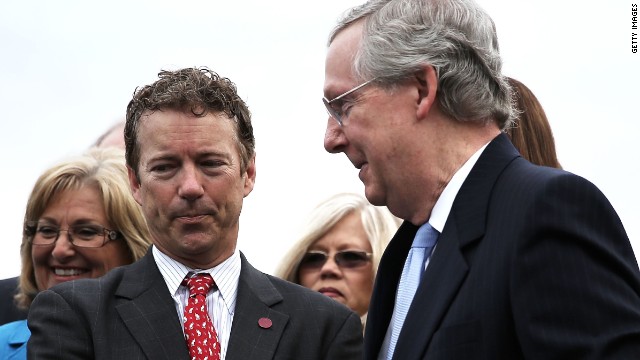 Paul, McConnell together on the circuit in Kentucky

(CNN) – In a  joint appearance, Kentucky's two U.S. senators, Mitch McConnell and Rand Paul, shared the floor at a fundraiser in Louisville.

The two attended the "Party for the Party Dinner" of the Jefferson County GOP on Friday evening. Each spoke for a few minutes, attempting to stir supporters and galvanize the grassroots.

The appearance comes just a few days after McConnell, the Senate minority leader, and Paul, the first term senator who's seriously considering a 2016 run for the GOP presidential nomination, teamed up on Monday to help roll out a hemp pilot program to benefit Kentucky agriculture.

McConnell's up for re-election this year, and faces a primary challenge from Louisville businessman Matt Bevin, who has some local and national tea party support.

The only one mention Friday of Bevin, however, was when a reporter asked Paul about Bevin's recent comments on same-sex marriage. Bevin created some waves when he asked where one draws the line between same-sex marriage and marriage between a parent and a child. A spokeswoman later clarified his comments, saying Bevin "sees no comparison between gay marriage and incest."

Saying his job is "not to be the arbiter of what everybody says in every primary," Paul responded to the question. "I'm going to let them speak for themselves and I think they're doing a fine job."

"It's going to be a spirited primary, and it'll go back and forth and back and forth," said Paul, who last year endorsed McConnell's re-election bid.

For his part, McConnell sounded pretty confident that both Bevin and his Democratic opponent, Kentucky Secretary of State Alison Lundergan Grimes, are no match.

"I'm not offended by having a primary. I don't have any sense of entitlement. I don't own this seat. I have to earn it, and I'll earn it in both the primary and the general," McConnell said Friday.